TONIGHT has been a long time in the making - seven years, to be exact. Seven years since a bunch of metal-loving schoolboys got together with the idea of forming their own band, writing some tunes and maybe even playing some gigs one day.

Fast forward to March 2018 and those boys, now determined young men, are seeing the culmination of a dream: headlining the Belfast Empire, to launch their debut album 'Contribute to Chaos'. For Donum Dei, it’s finally time.

To help make the launch a real party, they’ve brought along some friends to play their own tunes, and as if to indicate the rude health of the local scene, the three support acts are as diverse as any festival bill you’d care to see.

First up, young hardcore knuckleheads No Great Loss take to the task of warming up the stage with gusto, along with plenty of posturing and attitude.

Co-vocalists Gavin Brown and Paul Docs bounce off each other brilliantly, sharing the lead and occasionally exchanging fleeting delighted grins. It takes around six seconds before Brown decides the stage is far too small for their antics, and he’s on the floor with the punters, screaming in their faces and pacing the floor like a caged lion.

He then puts his mic lead to the test, heading towards the centre of the room before clambering up the balcony to the side of the stage. Docs, although not as inclined to go for a dander (although he does jump offstage towards the end, along with guitarist Darren), still manages to pack a hell of a punch with his tightly coiled bravado and furiously spat vocals. A brash, confrontational and highly enjoyable set.

Promptly fifteen minutes later, melodic thrash newcomers Ketos take to the stage and immediately submerge the crowd in a barrage of noise, all wailing guitars and savage vocals.

Frontman Pete Crenshaw (who provides guest vocals on one of the tracks on the Donum Dei album) cuts a daunting figure as he screams, roars, contorts himself around the tiny stage and even clean sings at times; his vocal range is truly impressive, as is his ability to chat to the crowd but not blather on unnecessarily.

Ketos are known for putting on passionate and rousing shows and tonight is no exception; each track holds the crowd’s attention throughout and their set goes by in the blink of an eye – always a sign of a great band.

And now, as the saying goes, time for something completely different…although a relatively new concern, the members of old school death metal band Strangle Wire are veterans of the scene, and it shows in their dedication and musical chops.

Hitting the stage and wasting no time in releasing a wave of instant ferocity, theirs is an all-out aural assault, complete with staccato beats, breakneck speed and riffs that threaten to knock holes in the walls.

Frontman Pete Clarke is in a class all his own: with the deepest roar this side of the Irish Sea, he stares balefully around the room, all wild hair and even wilder eyes, in a pugnacious stance that looks for all the world like he’s about to break into the haka, or at the very least crack your skull. An exemplary death metal set.

For those that have been in the scene for the last half dozen or so years, seeing headliners Donum Dei grow in both confidence and ability has been one of the highlights of that time, and tonight sees the culmination of that.

As they file onstage one by one, to huge cheers from the crowd, their excitement is palpable; an already shirtless Thomas Marshall seems almost unable to contain his fizzing energy, almost jumping out of his skin as he kicks, punches and leaps his way around the stage. ‘Murder and Mayhem’ sees riffs flying everywhere, as well as some impressively furious headbanging: there will be some sore necks tomorrow!

“The more you give us, the more we’ll give you! How does that sound?” Marshall enthuses before they launch into ‘False Hope’, which then leads into the hugely popular ‘Justice Fails’, all sinuous, almost bluesy riffs and pummelling drums. ‘Torture (Makes Them Speak)’ sees the return of Ketos’ Pete Crenshaw, while ‘Courage From Within’ (“the hardest song we’ve ever written” jokes Marshall) ends with the temporarily knackered frontman briefly lying on the stage to recover from the effort, much to the amusement of the crowd (and our resident photographer!).

They close their set with the vitriolic ‘Contribute to Chaos’, the track that is closest to their simpler, thrashy roots, and thank the crowd with sweaty sincerity and huge smiles.

The best thing about a band like Donum Dei is that it’s clearly a collaborative effort. Each member is talented, each gets to show that talent proudly onstage, from solos to backing vocals to some frankly outstanding drumming and, of course, Marshall’s charismatic vocal performances.

Although there were a few technical issues tonight – Marshall broke a guitar string halfway through their set but soldiered on regardless, while guitarist Stuart McLoughlin seemed to be struggling with his instrument (possibly a battery pack issue?), they banded together and pulled a blinder out of the bag.

Whereas before there was a certain youthful and innocent exuberance, now there are four young men filled with deadly intent and the talent to match. Seven years coming? Totally worth it.
Review by Melanie Brehaut
Pictures by Mark McGrogan 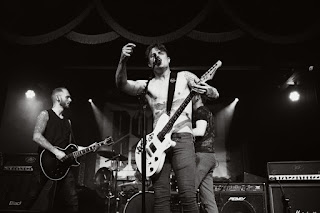 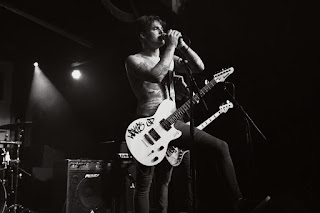 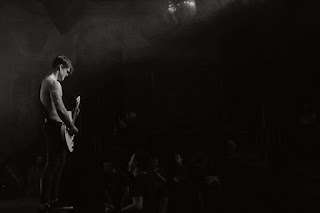 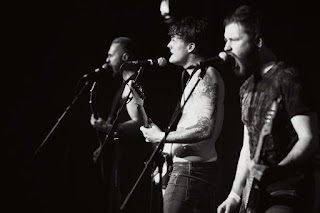 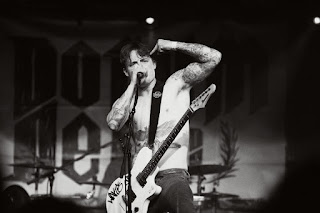 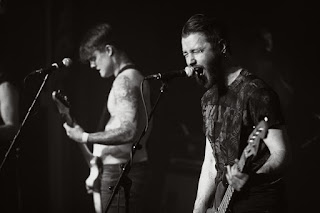 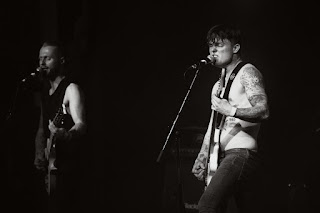 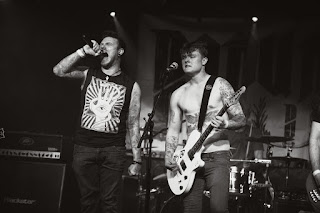 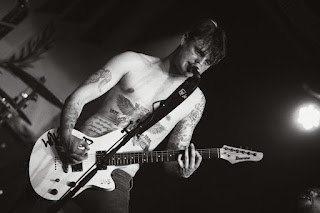 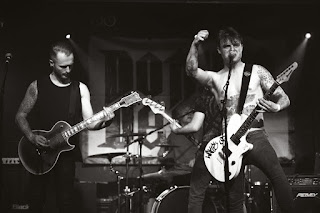 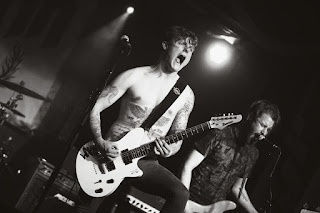 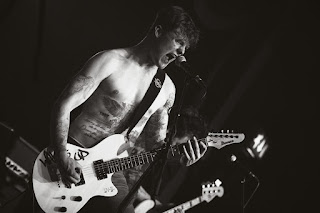 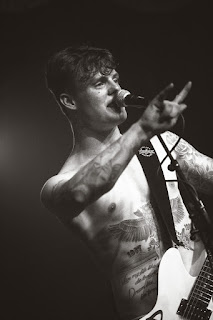