WITH the same tortuous effort of downloading an album for review it often means that one adopts a serious demeanour: considering all the dynamics, the playing, the arrangements, and the lyrical content.

But once in a while an album lands in the inbox that just makes even the hardest hearted rock and metal reviewer smile. 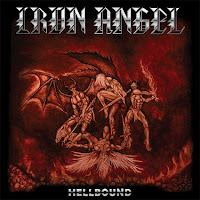 In fact Iron Angel's 'Hellbound' album had all at Metal Mansions grinning from ear to fucking ear.

Nevermind then tortuous route that saw the Hamburg act rise in the 80s, split, reform in 2014 and shuffle members like a Premier League manager rotating his squad. 2018 sees Iron Angel deliver an album that is pure metal.

'Hellbound' could have been lifted from that period of the 80s that saw many a speed meta act rise, but damn it, this sounds fresh and fun.

They have delivered a slab that really is a 'Ministry of Metal'...

Each song has that riffing, a frantic rhythm section, and "grab that mic and work it" from Dirk Schroder.

The tone is set with the heads down 'Writings on the Wall' but it gets better and better with each track.

Mitsch Mever, and Robert Altenbach weave metal spells the beguile and delight. 'Carnivore Flashmob', 'Blood and Leather' and 'Purist of Sin' being great examples of their work.

To be straight this transports us back to the heyday of bands such as Accept and other Teutonic metal giants. But, this is not an album to be seen through rose-tinted glasses.

Hellbound is an album that shows a band delivering what they know and do best - there is no point trying to pretend you are something you are not.

Iron Angel play heavy metal and play it well. We smile as we launch ourselves Hellbound. 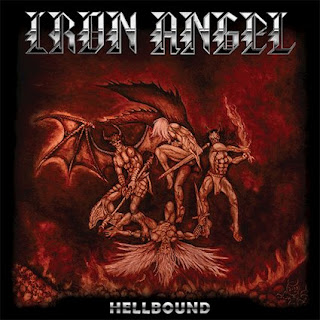