Following on from the critically acclaimed and commercially successful third year in 2017, Ramblin’ Man Fair returns in 2018.

Ramblin’ Man Fair is pleased to announce the first bands confirmed for the event in 2018.

The festival takes place in the beautiful Mote Park in Maidstone, Kent. The park is one of the largest in South East England with more than 450 acres of mature parkland and a 30-acre lake.

STEVE EARLE & THE DUKES (Outlaw Country Stage, Headline / UK Exclusive) – With a career spanning over 40 years, Steve Earle is revered as a consummate songwriter and performer, in addition to film and TV actor, author, poet and playwright.

He has also established himself as one of the most prolific songwriters of his lifetime, his songs recorded by the likes of Johnny Cash, Waylon Jennings and Emmylou Harris. Since 1974 Steve Earle has released 16 studio albums. In 2018 he will be playing a UK Exclusive set of his iconic album ‘Copperhead Road plus Hits’ at Ramblin’ Man Fair. 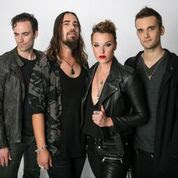 HALESTORM (Main Stage, Special Guest / UK Festival Exclusive) – One of the most exciting rock bands of recent years, fronted by the indomitable Lzzy Hale. The band have released a series of critically and commercially acclaimed albums and singles, including the Grammy winning single “Love Bites (So Do I)” in 2013. The band are also renowned for their consummate live shows. Halestorm are a worthwhile special guest for Ramblin’ Man Fair 2018. “Marking the precise point on the Venn diagram where fierce ambition and ability collide, Halestorm are heading in one direction, and that's up” – Classic Rock Magazine.

“We are so excited to be performing at the Ramblin Man Fair for the first time! We love playing for our fans in the UK and look forward to making some new friends too. We are ready to melt faces!!" – Lzzy Hale, Halestorm

BLACKBERRY SMOKE (Main Stage / UK Festival Exclusive) – One of the most loved new rock acts. Hailing from Atlanta, Georgia the bands southern country rock sound has seen them win a legion of fans worldwide. The band’s fifth studio album, “Like An Arrow”, released in 2016 went to No1 in the UK Rock and Independent Charts, as well as the Billboard Country Chart in the USA. The band are renowned for their live shows and have toured with the likes of Lynyrd Skynyrd and ZZ Top.

“We can’t wait to bring some Southern music to the Ramblin Man Fair......it’s refreshing to play festivals with such diverse lineups.” – Charlie Starr, Blackberry Smoke

SONS OF APOLLO (Main Stage / UK Festival Exclusive) – Sons of Apollo is the American progressive metal supergroup formed in 2017 and composed of legends Mike Portnoy, Billy Sheehan, Derek Sherinian, Jeff Scott Soto and Ron "Bumblefoot" Thal. The band’s debut album, “Psychotic Symphony”, was produced by Portnoy and Sherinian (as "The Del Fuvio Brothers") and was released on the 20th October 2017 through InsideOut Music. Ramblin’ Man Fair is delighted to welcome these legends to the mainstage in what is sure to be one of the weekends highlights.

To keep up to date with all Ramblin’ Man Fair announcements follow: 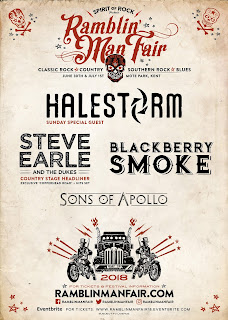