LIKE many bands Destruction have looked back at their lengthy history and wondered what to do with an extensive back catalogue. Way back in 2007 they released 'Thrash Anthems' to much acclaim.

Once they were done with their 2016 studio album ' Under Attack' Destruction ensconced themselves in the Swiss Little Creek studio for three months to re-record another set of legendary tracks from their past.

'Thrash Anthem II' was originally released to pledgers it is now out in a slightly re-jigged list via Nuclear Blast and praise Satan it is superb. What it does is not only remind us what great tracks they were in the first place, but it takes them to new levels. 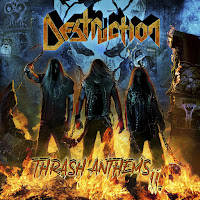 Sure, they are still harsh thrash attacks, but the passage of time and the mentoring by producer V.O. Pulver has supercharged them.

From the moment that 'Confused Mind' rips out of the speakers through to closer 'Satan's Vengeance' leaves you breathless, ears ringing and with a serious case of whiplash.

Schmeir's vocals come across as if he is one seriously pissed off singer with tracks like 'Dissatisfied Existence' erring on the side of terrifying.

Of course Mike and Vaaver are on top of their game but all three seem to have approached this with renewed purpose.

Being largely fans choices one expects the likes of 'The Antichrist' and 'United By Hatred' to appear, but any over-familiarity you may have is thrust aside as you gape in disbelief - they are the 'same' songs but...well let's just say that sound as if they sit comfortably in the 2017 pantheon of Destruction greats.

With Thrash Anthems II bridging releases until they next record a studio album this serves to remind us what a fucking great band they are.


Thrash Anthems II is out now on Nuclear Blast 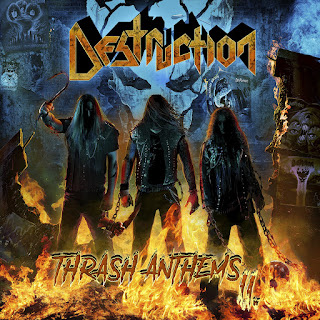