LIVE REVIEW: Snocence blast all into metal oblivion as they lauch No Gods, No Masters III

ON Saturday, November 11th the Limelight 2 Belfast was blasted into metal oblivion for the EP launch of one of Northern Ireland’s finest veterans, Sinocence.

‘No Gods No Masters’ Vol III has kept the guys from us for long enough as they have been buried neck deep in blood, sweat and tears at Einstein Studios with Frankie McClay cracking a metaphorical whip on their behinds, to produce the finally to what can only be described as the bands long awaited masterpiece.

The support on the night couldn’t have been more fitting as the guys all put on 100% entertaining sets. Support came from ‘Sky Pilot the-band’, ‘Oracle N.I’ and ‘Ketos’ who wasted no time kick starting the night as only ‘Ketos’ can.

Due to unforeseen circumstances we missed an apparently cracking performance, with very charismatic front man Pete Crenshaw warming up the local and loyal supporters. The hard to please tog for the evening, Liam could not have praised this outfit any higher

Pacing the stage like an angry bear and executing Satanic wildcat vocals to send shivers up and down your granny’s spine, Jason Kerr of ‘Oracle’ set about bringing a deathly darkness to the place with a band that dished out a full heavy sounding set, tapered with catchy riffs and extended screams upon a virgin witness to their brand of metal.

‘Burn The Nameless’ and ‘Hollow’ seemed to unearth a few happy head bangers as the limelight 2 started to fill up nicely. ‘Take My Blood’ was a bouncy crowd nodding metal groove with nice time changes encouraging a few more fans to lose their shyness and venture forward.

Taking a few seconds to thank DP and ‘Sinocence’, plug the promise of a new disc early next year and grab a breath or two, they went out on a glorious ‘No God Waits For You’. This is a band worth keeping an eye on; a very strong performance throughout the set made them hard to take your eyes and ears off, even when you might have been dying with thirst and wanted to head to the bar.

By now, the onlookers are well oiled and enthusiasm is building as the penultimate act takes their place. The honestly hypnotic three piece ‘Skypilot’ with astounding harmonised vocals are always a pleasure to go see. The ‘Sabbath’, ‘C.O.C’ grooveinesss is a warm welcome amidst a night of high energy, searing vocals and metal blast beats! They comfortably take the stage like they were born there and deliver a beautifully constructed set consisting of ‘John IV’, ‘SuperDuperNaut’ and ‘Bender’.

These guys are just one of those bands that fit comfortably into every conceivable scenario. The ease and pace of their delivery is always palatable and reassuring, with familiar riffs but composed in their own unique way. Judging by the reactions from the crowd they were well received and a very well thought of band with a tight set of carefully crafted songs, to set the mood for the kings of this night – ‘Sinocence’.

Four of the nicest guys to play this venue take the stage, feet planted firmly to the floor boards. Testosterone levels are at an all time high, so much so that it has seeped to those in the front row, and excitement, exhilaration, and a feeling of Goddammit lay the goods on us dudes has filled the room.
The intro plays out for ‘Sinocence’ to deliver the much anticipated third part of their ‘No Gods No Master Trilogy’.

And, so it wouldn’t be a Sins gig without ‘Long Way Down’ opening their set as the much loved anthem has the crowd joining in and singing the lyrics right back at them with full ferocity. Volume one and two get a run for their money with firm favourites enabling everyone to get into the swing of things with ‘In Kymatica’ Metalbox’ Perfect Denial’ and ‘Ascension Code’ starting and finishing their set. The hub of their deliverance however was No Gods No Masters Vol III played in full.

Ben beating the hell out of that drum kit at the beginning of ‘Full Spectrum Dominance’ is a scary sight but a truly awesome sound! A battering ram of fast paced bass from drums and guitars topped by angry vocals from Moro grabbed everyone in front of them by the throat. This song is one heavy mofo, and looked exhausting to deliver live.

They follow up with more of the same only bloomin faster, in ‘Bilateral’, and glancing around the room it’s not hard to see the look of pure joy on the faces of the fans.

Sinocence have upped their personal ante all right, this is heavy fucking metal, with enough melodic touches just to keep your head from exploding. Pedal to the metal from all four guys was breathtaking.

‘Drop The Bomb’ was definite proof that Sinocence have kept to their formula and distinct sound accept that, and no=one knows how it was possible, they weighted this beauty down with even more catchy riffage and it is a mystery how the hell Moro’s throat wasn’t ripped out by now. Anto spills out spectacular solos almost as if he’s just sipping a beer - awesome. Hard not to love the chugging too; great song and crowd pleaser.

The shouty, violent ‘Mind Over Murder’ sees Ben like a madman on speed once again behind that drum kit, guitars and bass are taking one hell of a thumping too and sweat is flying off all four guys as well as the hair flailing fans -  hanging onto the stage for grim death to stay upright, yes, its that fast!

The closing song from the new EP, and a favourite amongst many a reviewer is ‘No Gods No Masters’, this went down in a storm of excited head banging, dancing and jumping from all of the front row, including yours truly! Wow what a way to finish the EP, this could easily be a rock radio hit - a metal radio hit.

However, the sound is more accessible to those who aren’t as deathly heavy as a few of us.

Wow what a night. Excellent job all round Sinocence! Loved the songs, loved the set, loved the atmosphere and we can’t wait to catch them live again soon.

Just on a note to finish, and it's just left it this late to mention it but there were a few low the bad parts more than the good parts. The night did have a few gremlins at large, and equipment wasn’t at its full 100% power, an amp decided to play up a little, but did it spoil anyone’s night? Did it hell!

The professionalism of all the bands that the technical hitches fell prey of, need commended as they just got on with the job of delivering a gig of jaw dropping proportions. Kudos to all! 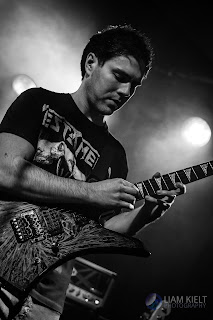 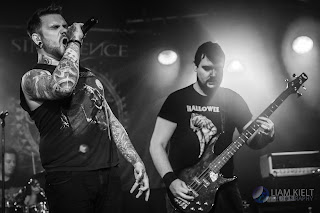 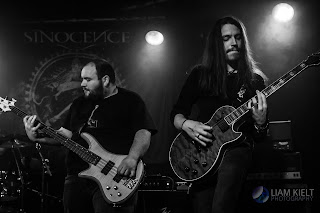 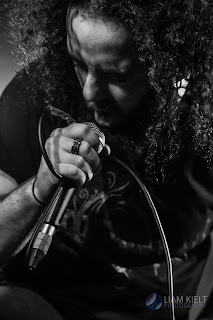 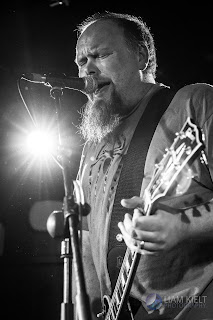 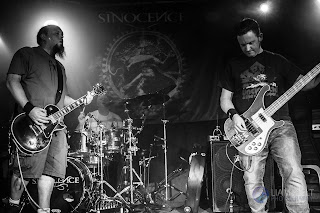 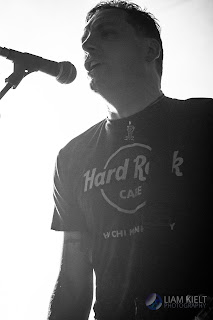 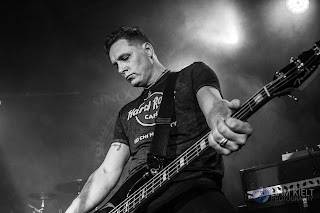 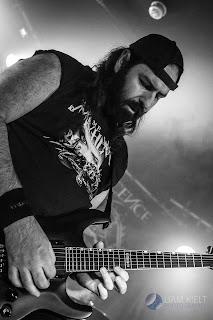 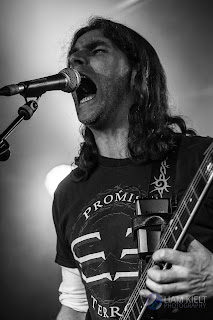 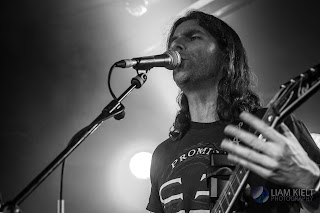