ALBUM REVIEW: Hardcore goes Toe to Toe with Rise Up

Toe to Toe are an Australian hardcore Punk rock band. Which basically means lots of banging noise and screaming. Right?

Even if you are not a fan of hardcore rock or punk rock Toe to Toe seem to have an uncanny knack to sound great, make you feel great and want to punch the hell out of the closest wall. All at the same time. 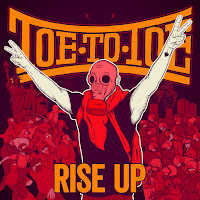 And even though they are Australian, they really don’t sound like AC/DC at all...

Their Album, ‘Rise Up’, kicks you off your couch with a size 10 steel capped boot with the first track
“My War, My Way” with a ferocity that sets the tone for the rest of the album. It’s as if they can just conjure up a mosh pit at will

“First Sin” continues the auditory onslaught with a heavy rumbling rhythmic undertone that almost physically pushes and pulls you through the whole song.

Next up is “Take Down” and it vaguely feels like they have resurrected Lemmy just to play on the track. It really has a wonderfully angry Motorhead feel about it.

A heavy laced guitar intro takes you into “D.T.O.M.”  Scott Mac’s harsh growling vocals just spit out venom as the band chugs its way through the gloriously raging song.

The title track “Rise Up” will definitely make you want to run out of your house, grab a flaming brand and burn some shit down.

A slow intro to “Blacklisted” is just the band trolling you as it suddenly blasts into a speed thrill of a tight track that just sounds superbly filled full of rage and injustice. It really is a punked up version of hard and heavy rock.

Smashing the metal out of the park comes “Turn Your Head Around” with another track reminiscent of Motorhead. Its wonderfully anarchic and filled with so much energy that your head will start shaking about of its own volition. Its almost like it’s a subliminal message for your cranium to go apeshit.

Then you get the “Rub of the Green” where you almost think ‘Are they going to do a Primal Scream cover?’. Er, Nope. This is another fantastic assault on the auditory senses. Again infused with an infectious melody just like all the previous tracks.

Then an ode to “Sydney” in the only way Toe to Toe can. An anthemic raucous song that would be perfect for the footie stands. It is replete with so many lyrical lines that make you want to sing along in a gang and every so often shout out that the ref is a wanker.

Back to the grind with ‘Monolith’ with a Slayeresque ferocity that will put you in mind of ‘Repentless’. Definitely one you can keep listening to.

Then you get to ‘Bastard’s Luck’ another wrath filled emotional journey into a pure ragefest. Hard. Heavy. Fast. Growling. A track full of boundless energy.

The final track is ‘Endurance’, which describes exactly how you probably feel right now having endured an amazing tour-de-force. Its like a salute to you that you can now join the ranks of those who have survived the epic audio assault and your heart hasn’t given out.

The whole album is just suffused with an incredible raw energy that will punch and kick away any inkling of apathy you may have had just before it all started. It’s an album that really unapologetically grabs you by your throat and balls and hurtles you through a smashing of your earlobes at an incredible rate.

This is punk/hardcore that will satisfy any metal head or rocker.  It will rise you up and you will be absolutely thankful for it.

Definitely worth adding to your collection 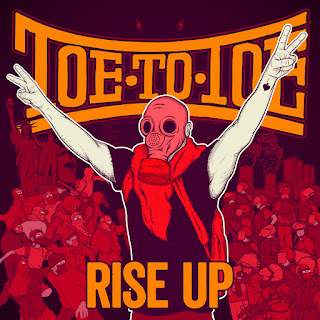