LIVE REVIEW: HRH XI kicks off with a roar

LESS than 24 hours after Hard Rock Hell held its first ever Awards show, bleary heads were thrust aside as a core following also arrived determined to keep the party atmosphere going - and one man made sure that despite a family illness he was going to rock.

Dee Snider is a real trouper in every sense of the word - few can match his performance. However before he mounted the stage at HRH XI the other Thursday night acts had everyone revved up.

Ryders Creed, Idlewar, Killcode, Black Aces, and Wayward Sons delivered action packed sets - and that's no lazy cliché as each proved that they were determined to pack as much energy into every minute. 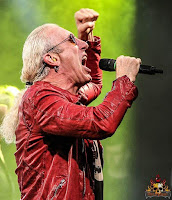 After last year's positive reception to the opening ceremony fire dancers took to the stage to bring the curtain up on proceedings. But the real bombast followed as Ryders Creed brought heavy blues in a tight and well-balanced 45 breathless minutes that left many gasping for more.

All the way from Southern California Idlewar are riding high with the release of their album 'Rite' out a matter of weeks before HRH on Off Yer Rocka. The trio were obviously out to prove a point with James booming out every line as determinedly as he hit his bass and Rick laid down licks aplenty.

New York City blues and metal rockers Killcode brought an anthemic rock and roll attitude, striding across the stage as if playing as Madison Square Gardens headliners, smiles and snarls in equal measure. On this display their next album - to be produced again by none other than Joey Z - is eagerly awaited by all at HRH.

Blues rockers Black Aces have choruses guaranteed to get those horns raised and the Knights of the Dark Order held them high for each song, pints aloft. With the crowd pleasing over of 'Rock 'n Roll Damnation' mid-set Black Aces once again prove their path is upwards.

It might have seemed on the surface that when Wayward Sons was announced the tag of 'supergroup' would be glibly given to them. But as soon as the album 'Ghost of Yet To Come' hit the shelves it was clear this was a distinct project. And, the confidence Toby Jepson has in the songs was clear in a set that only played one Little Angels track - 'Young Gods'.

Sam Wood is the perfect foil for Jepson's writing in his interpretation, as are the textures of long-time collaborator of Jepson's Dave Kemp. 'Small Talk', 'Ghost' and 'Backslide' were among many of the highlights.

With the atmosphere almost febrile in anticipation of the Dee Snider's set the packed main stage area was primed, ready and eager. Now that Twisted Sister have been laid to rest, many looked back at his 2016 Bloodstock show to see how the flamboyant front man could top that.

He did and more.

Drawing from TS songs and his release 'We Are The Ones' this was as good a set as anyone could have wished for. Strident, cajoling every audience member along, he may be going through a personally difficult time, but that didn't take one ounce of energy away from his performance.

Sure, 'The Kids Are Back', 'We're Not Going To Take It' and 'I Wanna Rock' had every voice raised, but the cover of Soundgarden's 'Outshined' brought a little poignancy, while Nine Inch Nails' 'Head Like A Hole' was a masterstroke.

The familiarity of his solo album amongst the crowd members was clear from the opener title track from 'We Are The Ones' and the awesome 'Crazy For Nothing'. And, yes every middle finger was raised in the air for 'So What'.

As the strains of 'Highway To Hell' faded away in ringing ears Mr Snider and his band left the audience members, happy, with ragged voices and beaming faces. 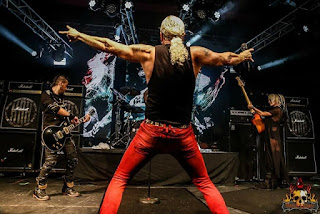