ALBUM REVIEW: X-Drive fail to stand out with solid if unspectacularUS rock

And they have managed to produce a competent and solid, if unspectacular album.
'Get Your Rock On' comes across as fairly 'traditional' American melodic rock, tinged with a touch of the blues.
With album opener, 'Love’s A Bitch', you're met with raw guitar riffs, and St. John's bluesy vocal delivery. The second and title track, 'Get Your Rock On'  gives a nod to early Velvet Revolver, albeit a slightly watered down version.
The mid tempo (a common theme on the album) ‘California’ is the most melodic and indeed memorable song on the album. It is the first single released. A catchy chorus, made for America! . 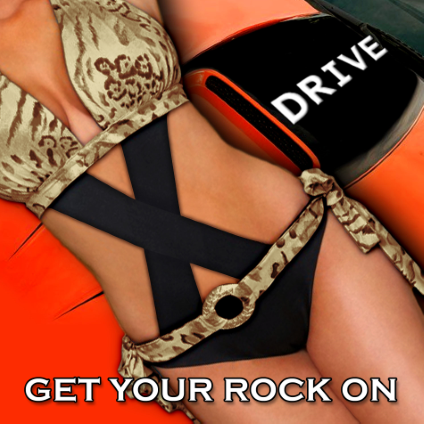 The next two songs are both in stark contrast to one another, 'Turn The Noize Down' (yes, the 'Z' is actually in there) is noisy and raw.
‘Beyond The Angels,’ on the other hand, is the album's big ballad, in the best traditions of a melodic rock power ballad, ticking all of the required boxes.
With ‘Change Of Heart,’ the band again goes for a more laid back, acoustic approach. Closing tune ‘Love Breaks The Fool’ again hints at blues tinged melodic rock, similar in style to Whitesnake (arguably on an average day!)
The album is a solid if unspectacular release that will no doubt delight many whilst passing others by.
To our ears, the album suffers from too many mid paced tracks that simply blend into one another  and it would benefit greatly from a few more up tempo tracks.
St.John has a great rock voice and deserves a wider audience.To us, his vocals are indeed the main highlight of the album. Other than 'California', we’d be hard pushed to remember too much about the album and  there isn't much here to suggest X Drive will stand out from the many US bands already delivering music of this genre.
Review by Baal
X-Drive's Get Your Rock On is out now on Frontiers
Posted by Jonny at 8:42 pm

Email ThisBlogThis!Share to TwitterShare to FacebookShare to Pinterest
Labels: Frontiers, Get Your Rock On, X-Drive