NEWS: The Black Dahlia Murder prepare for release of Abysmal

OUR death/black metal correspondent, Zakk, went the north side of ape shit in anticipation of the new release from The Black Dahlia Murder on September 18th...and we can't blame him if their last release is anything to go by. 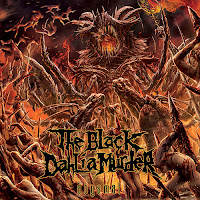 'Abysmal' is the name of what the band and their PR promise to be a "vicious slab of unrelenting aggression'. Well it's The Black Dahlia Murder, we expect nothing less!

Pre-orders for 'Abysmal' open on June 24th at the band's new official website.

"The new album 'Abysmal' is true to The Black Dahlia Murder formula but further down the evolutionary path we began with our 'Ritual' release," said vocalist Trevor Strnad. "It has a bigger, more dynamic and developed songs.

"It sees the band in a darker, faster and more melancholic place than anything we've done to date. It is an album wrought [with] emotion on a scale that we haven't reached with our previous attempts. It's dripping with an urgency, and an undeniable sincere life and death purpose.

"It has moments of triumph and moments of utter abandon and defeat. It runs the gamut."

As if that wasn't enough Strnad has launched a new column called 'The Obituarist' on one of the other websites...in which he picks what he considers to be the best of the death metal underground.

Well he should make his wee way over to check out some of Northern Ireland's bands!