OKAY! Hands up, who remembers Trixter?


Well, Trixter were one of a plethora of hair metal bands who appeared on the scene in the late 80's,early 90's before those unborn children of Grunge hit the scene and buggered everything up. They released 2 albums before disappearing as quickly as they appeared.
They reformed in 2008 with the line-up of Peter Loran (lead voals, rhythm guitar); Steve Brown (lead guitar/backing vocals); PJ Farley (bass/backing vocals); and, Gus Scott (drums/backing vocals). That is by any definition a lot of vocals! 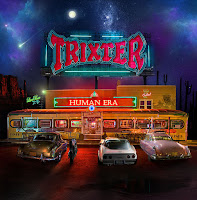 And they have just released their latest album 'Human Era'.


Starting with a bang the first two songs,'Rockin' to the Edge of the Night' and 'Crash the Party' see the band, indeed, in full on party mode with big riffs and choruses that could have been lifted off any Def Leppard album, with even a hint of Motley Crue (but we won't hold that against them!) The drums and guitar drive these tunes on and there's a real sense of fun about them.


That is in stark contrast to third track 'Not like all the Rest'. Most likely aimed at the radio and a larger demographic this song just doesn't seem to fit with the rest. A bit too commercial for this reviewers' taste with a pop/rock riff and chorus (count the na,na's),it might get a run out on Glee, but maybe needs' must.


Thankfully, 'For You' cranks the pace up again with a fast paced guitar and drum heavy intro Van Halen used to be famous for. Something which continues throughout the song. Nice solo by Brown on this one.


Ballads feature as the next two songs with 'Every Second counts' up first followed by 'Beats me Up'. The former being more of an up tempo, stadium anthem. The latter has, again, a Def Leppard influenced intro, and a vocal style Jon Bon Jovi would deliver. Lyrically it's a bit lame but its not a bad song.


'Good times Now', 'Midnight in your Eyes' and 'All Night Long' gradually up the tempo, each song having strong vocal combinations which are a highlight of this album. 'Good times Now' lacks in the lyric department again but 'Midnight' is much better with a catchy, if obvious, chorus. Good guitar work on this again.


'All Night Long' belts along nicely with a solid rhythm section and chugging riff. This would probably get decent airplay on Classic Rock radio stations.


Penultimate tune 'Soul of a Lovin' Man'  is a straight up rocker with a more bluesy feel, which will have you nodding along to it. This is probably the strongest song on the album with a great solo again by Brown.


Finally we have 'Human Era'. A retrospective of the bands musical journey thus far. A good bass line from Farley and a more subdued vocal performance by Loran make this a fairly strong finish to the album.


All in all this is a decent recording which good have been better if they hadn't played quite so safe in places but it's definitely worth a listen.
Review by Andy Gillen
Posted by Jonny at 11:50 pm