ALBUM REVIEW: House of Lords - can be lively and sleepy in the Indestrutible chamber

IN Westminster the House of Lords contains members that are lively, skilled debaters with stongly held political views; and it also contains those who rarely show up and rarely contribute. And, by the same token there are some songs on House of Lords new album that don't really contribute.

'Indestructible' is not a bad album by any means, but there are songs such as 'Pillar of Salt' and 'We Will Always Be One' that sound derivative and on the vanilla side of bland.

With the negative out of the way most of the rest is a heady mix of heaviness and melody. Jimi Bell's guitars are the perfect foil for James Christians rich tones with the titles track and 'Die To Tell' being the perfect examples.

The overall feel of the album is much more rounded than some of the middle period House of Lords, which to some extent must be due to this current line-up being in place since 2006. Only Christian is left from the original 1989 line-up, but Bell, Chris McCarvill (bass) and BJ Zampa (drums) are clearly contributing as much to the overall sound. 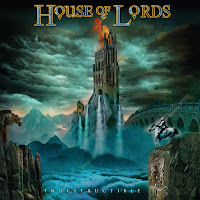 “The name Indestructible was chosen because we all felt that we have been through a lot in our long careers and what better way to say 'hey, I'm still here' than by giving the cd a 'bold' title,” said Christian.

“The album is heavier in the beginning, but we love songs that are both Melodic and Heavy” added Christian, “and the idea was to fill the best of both on one cd without sounding like two different bands. I think we have accomplished that."

Christian cites 'Pillar of Salt' as one of his favourites, but there are many stronger tracks. 'Another Dawn', the delicate 'Eye of the Storm' and the stomper 'Ain't Suicidal' are all belters. A perfect example that bands and reviewers are subjective creatures.

But what cannot be denied is the strength of having this line-up being together for 10 years: "...the four of us are musically in sync," said Christian.

Ultimately 'Indestructible' breaks no ground, but it is a good album which, although flawed, had several songs added to rotation long beyond the 'allotted' review hours.

The combination of stadia choruses, echoes of power metal and some tasty riffing (for example album closer 'Stand and Deliver') make it worth listening to.