COMIN' ATCHA: Glenn Hughes books Belfast date in October (and Doug Aldrich will be slinging his axe with Hughes!)

HE may be one of the most revered vocalists, and he may be touring across the globe, but Glenn Hughes has managed to slot Belfast into his Autumn tour.

He will play The Limelight, Belfast on Thursday 22 October. Tickets are on sale now

The set will showcase highlights from Glenn's colourful career: Trapeze, Deep Purple, Black Country Communion, California Breed along with his Solo material.
Commenting on the UK dates, Hughes says:
"It's always a great pleasure for me to play in the UK. I have lived in Los Angeles most of my life, but my career started back in the UK.
I love my fans, and personally interact with them online, or at venues on my travels. There is no greater high than performing and to reach out to my fanbase.
Joining my Band on Tour, will be Doug Aldrich, former Whitesnake and Dio Guitar player. Ronnie introduced me to Doug years ago, and I felt it was time to ask Doug to Rock with me.
It's gonna be E P I C…".
Support for the tour is Jared James Nichols who recently released his debut EP Old Glory & The Wild Revival. 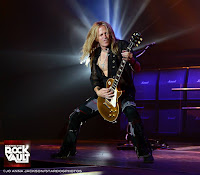 Vocalist/bass guitarist/songwriter  Hughes is a true original. No other rock musician has carved such a distinctive style blending the finest elements of hard rock, soul and funk. That astonishing voice is Hughes' calling card.
He's known as a singer's singer. Stevie Wonder once called Hughes his favourite white singer.
Hughes, a native of Cannock, England, absorbed all kinds of influences, including early British hard rock, the Beatles and, most importantly, American soul and R&B. The sleek Motown sound from Detroit and the gritty Stax/Volt sound from Memphis left their mark on him.
The first important band Hughes was a member of that achieved notable success was Trapeze. The band's early '70s albums included Medusa, Trapeze and You Are The Music... We're Just The Band.
In 1973, Hughes joined Deep Purple. The hard-rock legends had just weathered the departure of vocalist Ian Gillan and bass guitarist Roger Glover, but guitarist Ritchie Blackmore, keyboardist Jon Lord and drummer Ian Paice continued with the addition of Hughes and David Coverdale.

Since 1992, Hughes has toured extensively in Europe, Japan and South America in support of solo albums, but more recently has been involved with award winning supergroups', Black Country Communion with guitar star Joe Bonamassa, keyboard player Derek Sherinian (Dream Theater) and drummer Jason Bonham, son of the late Led Zeppelin legend John Bonham and just last year, California Breed, who also featured both Hughes and drummer Jason Bonham along with newcomer guitarist Andrew Watt.
In between his hectic schedule, Hughes also found time to publish a book, "Glenn Hughes : The Autobiography - From Deep Purple To Black Country Communion", the Number 1 best seller is available in both hard and soft cover editions from all good retailers.
As it says in the blurb "Make no mistake. The Voice of Rock never left the building".
Posted by Jonny at 9:59 am