WHEN it comes to metal there is something intangible that unites and binds amidst a maelstrom of music and mayhem that despite the horrific faces and brutal lyrical imagery is life-affirming and leaves an audience emerging from concerts smiling and exhausted.

There arefew finer examples of this as when Devildriver - with support from Bleed From Within and Sylosis - took the stage in Belfast's Limelight1, with a display of devastating heavy metal.

Bleed From Within suffered from the curse of the opening act, playing to a half-full venue, many of whom were there only for the top two acts. However, they were determined not to be daunted. Shaking off the supposed metalcore tag the Scottish band took to the stage with intent, and performed as if they were the headliners, maintaining musicianship and onstage banter to a high degree and earning new fans as a result.

Sylosis are one of the bands that have been bubbling under for a while, with their own devoted audience ready to head straight to the pit. 'Fear the World' and 'Teras' were set highlights.

What they did prove is that they are to be escalated to a higher plain in the future - the standard of playing was at a particularly high level and the Middleton's lead sections were played with the ease of one who knows his musical reference points and is prepared to build upon them.

Despite only having just over half an hour on stage Sylosis have visibly grown up since the release of last year's Monolith, and even having a stand-in drummer didn't deter them.

Devildriver haven't been back to Belfast since 2006, when they headlined Rottfest. And, when they took to the Limelight1 stage it was a meeting of minds as if friends old and new were at a particularly chaotic family reunion...

No fancy fanfares, no melodramatic lengthy intro tapes, no fuss, no frills - by the time the opening chords of 'Head On To Heartache' reverberated throughout the venue there was only one focus, a metal band: nothing more, nothing less.

And, that is what undoubtedly all fans really want. Dez Fafara is the congenial frontman, like a tattooed ringleader, the mad uncle who gets the party started, and with a growl that terrifies the faint hearted. 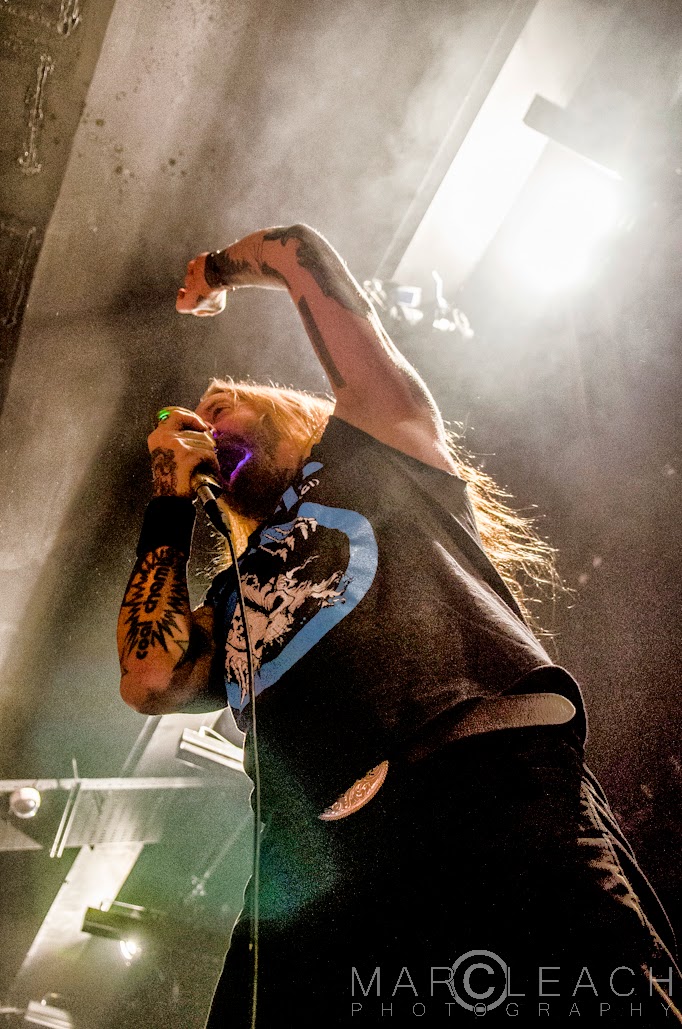 Flanked by manic guitarists Jeff Kendrick and Mike Spreitzer, roaming Chris Towning on bass and anchored by John Boecklin on drums the five-piece delivered what can only be described as a well-rehearsed, well executed and powerful set; each member comfortable with their roles and each one determined to raise each other's game.

The pair of songs 'Not All Who Wander Are Lost' and 'Before The Hangman's Noose' were ear-splitting, mosh pitting metal at its best.

The vast majority of the audience were familiar with all the songs on show, and a charged cover version of  Awolnation's 'Sail' brought the audience to a peak.

And then the groove kicked in...

'Clouds over California' was heavy, groove, melodic metal, with Kendrick and Spreitzer rolling the riffs around Fefara's insistent singing.

Closing with 'Ruthless' this was also a ruthless execution of metal at its best, the holy unity of band and audience merged together in a way that left all exhausted and all happy.

All three bands are examples that while pure aggression is at its heart, pure joy is the soul of metal; with all the darkness and all the supposed imagery it is a music form that has the potential, for at least a few short hours when performed live, to bring hearts and minds a thrill of freedom from the mediocrity that passes for culture in the 21st Century.

MaGGie said...
This comment has been removed by the author.
1:33 pm

"mad uncle who gets the party started" This made me chuckle and it's true, it was a great show not only from Devil Driver but from all of them, I had a blast!

I think we all did! Great band, great show and a great night