THERE is a wealth of female fronted symphonic rock and metal bands kicking around record stores and download charts across the world at the moment; however, occasionally you come across one which sits a little to the left of what you expected - and such is the self-titled release from SAVN.

Sitting in a world dominated by keyboards and symphonic sections the elements of guitar and drum are relegated to supporting roles, with no sign of an empathetic solo from a six-stringer.

And, that is where we initially found it difficult to get our heads around this album - where were the solos....

But after continued listens there is something that makes up for this, in the shape of  Carmen Elise Espenaes - sister of Liv Kristine of Leave's Eyes - and former front woman of Midnattsol.

Her haunting refrains push the melancholy with a lyrical message of hope, which given that SAVN translates as desperation is quite a feat.

“There is a strong red line through all of our songs," said Carmen. "Directly or indirectly they all touch the theme deprivation in some way, that’s the reason why we decided to have the same title as the band`s name."

From the off the track 'Musical Silence' sets the scene, the desperation of being without your craft then rediscovering the gift it can give.

And for all the band members SAVN is something of a re-discovery of that craft. The roots of the band lie in the late 90s Norwegian 'goth metal' (their description not ours) of The Sins of the Beloved. When Stig Johansen (vocals and guitars) and Anders Thue (keyboards) recruited Carmen to add vocals it seems they gradually came together as a musical unit.

And the essence of the musical unit is summed up on 'The Demons in Me' - once again lyrically about internal struggles in the search for personal redemption. It is a rounded track of symphonic rock bolstered by the appearance of Michelle Darkness (End of Green), in which keyboards and strings add to the atmospheric effect.

Guest appearances litter the album, but complement, but do no crowd the release.  Fiddle players Dag Bjorkedal and Lillian Hodne appear as does the Lingua Mortis Orchestra (which appears on the tracks Sorrowful and Lengselens Hand) directed, recorded and by 'composer' and Rage guitarist Victor Smolski.

However, what is the more notable appearance is by Carme's sister Liv from Leave's Eyes on 'I Am Free', the siblings' voices working in concert. 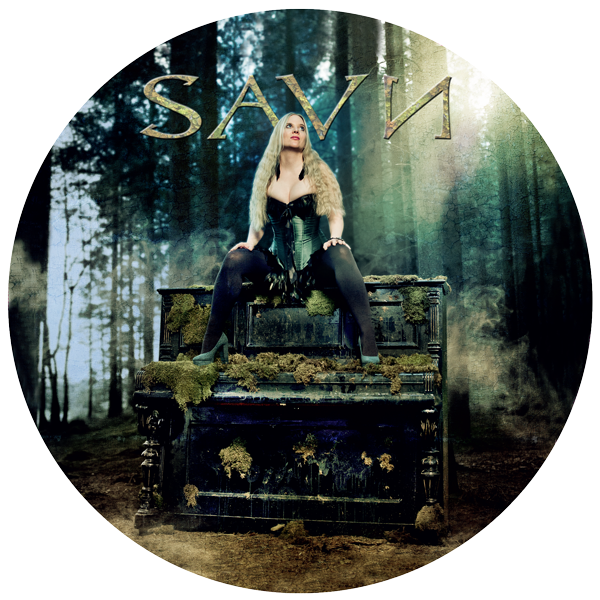 There is within this release a real sense of drama - sometimes slipping into melodrama, but overall coming across as a piece of uncontrived musical rock theatre.

It would be a stretch to describe this as a metal performance, but the musicianship throughout echoes the sense of the lyrics. Carmen states that although the tracks are about individual and band experiences she has also pointed them at being something the listener can relate to.

The penultimate track 'Now Or Never' is the best exemplar of this. Carmen describes it as:

“A wake up call; many people forget that it might be a chance that you only live once. They don't live in the moment and live their lives as there would be many more chances to come. Now it`s the time to change”.

Overall SAVN's self-titled release is a piece of art best sampled alone, with the chance to reflect on the soundscapes and the melodies, while penetrating the lyrics.

The addition of some more guitar leads to echo more emphatically the magisterial melancholia would have been the icing on the SAVN cake. However, don't let this deter you from listening. Should you seek a reference point. Carmen's sister said:

“If you like the early Theatre Of Tragedy, you'll enjoy SAVN”, she said. “It's very down to earth. Stig was in The Sins Of Thy Beloved and there are things he really loves about that period of bands like Sirenia and Tristania.

"He’s always been influenced by these bands and what he put together with Savn is like a dream come true”. I love the album. It's an excellent piece of art”.
Overtime we've come to like this album, wavering towards Liv's sentiment of loving it.

Produced by Leave's Eyes Alexander Krull, SAVN is released Digipak CD, Vinyl and picture disc at the end of April on CDR Records Norway via Intergroove and also as a download.