BORN the son of a 'preacher man', he grew up to play loud, proud, fierce rock 'n' roll, Ian 'Lemmy' Kilmister epitomised the hard living stars of yesteryear, but never wavered from his chosen musical career.

While tabloids and the news channels play the song Motörhead were most recognised for ('Ace of Spades') Lemmy and the band had more depth than many could imagine.

Increasingly looking frail over recent years, Lemmy still managed to complete a final European tour before he returned to his Californian home to succomb to cancer on December 28th.

The hard rock, punk and metal community has been paying warm tribute to Lemmy, and justly so. Lemmy was the icon, but also a true gentleman in the shape of the old cliché of a British eccentric - following his own path and sod all the rest: 'Born To Lose, Live to Win'.

With the claims about his womanising (he admitted to sleeping with more than 1,000 women) it is perhaps no surprise that he took his first tentative steps towards his later success when he noticed at school that if you carried a guitar "chicks flocked to you".

As the son of a minister he was part of an early beat rock band, the Rockin' Vicars, and toured round the north west of England, an early induction into the ways of touring.

A quick glance round the web pages, magazine articles; a scan of his autobiography (White Line Fever) and viewing the rockumentary 'Lemmy' will connect the dots to the point when Motörhead became one of the most revered bands on the planet.

Roadie for Hendroix, kicked out of Hawkwind for being caught with drugs, wanting to call his band 'Bastard', and forming Motörhead with Larry Wallis and Lucas Fox and declaring themselves to be 'Beer Drinkers and Hellraisers' - and this was only the beginning.

With Phil 'Philthy Animal' Taylor (who died on November 11th, 2015) taking over from Fox and drafting in 'Fast' Eddie Clarke to replace Wallis on guitar duties Motörhead began a march towards fame and no little infamy.

Early radio appearances for the first brace of Motörhead albums saw the fanbase amongst rockers and punks grow at a time when heavy metal was burgeoning with the New Wave of British Heavy Metal marrying punk with early metal.

Lemmy always distanced himself from any reference to metal - his ontsage declaration was "We are Motörhead and We Play Rock 'n Roll".

But, it was the metal crowd - along with a healthy smattering of punks - who took Lemmy and Motörhead to their hearts.

Here was a man who, to use the stereotype, lived and breathed the lifestyle. Straight talking, unique, he trod a path through life few could imagine and no-one could aspire to keep up with.

When 'Ace of Spades', the single and album smashed the charts open wide Motörhead's star was shining with the glitter of booze, speed and stardom. Capitalised with the live album 'No Sleep to Hammersmith' Lemmy later recalled management and deals with labels left them seeing little of the millions those albums earned.

Undaunted Motörhead and Lemmy continued. Appearances on advertisements and constant touring, through various line-ups until settling down with Mikkey Dee and Phil Campbell, what had been stardom in the 80s became a tried and trusted live act, releasing albums sadly overlooked by many.

Life on the road was something Lemmy seemed built for. The prodigious alcohol consumption, amphetamines and chain smoking were but the norm until later years, when he dumped the 'Jack and Coke' for vodka and orange juice and quit the cigarettes.

But amidst the excess lay a man of great wit and intelligence. He was almost painfully generous with his time and had quips to spare for people and in interviews, however very few noticed what a great lyricist he was. When Ozzy was struggling to complete lyrics for the 'No More Tears' album he noted that Lemmy "nipped" over and had three songs words penned in a matter of minutes.

On Motörhead tracks the early word plays evolved into increasingly sophisticated observational takes on society. Yes, the devotional tracts to rock 'n' roll were still there, but he also railed against warfare, religion, and abusers in affective invectives. ['Soldier', 'God Was Never On Your Side' and 'Don't Let Daddy Kiss Me'.]

Perhaps his lyrics for '1916' that were amongst his finest. It was effectively a tone poem more than a song that captured the pain and slaughter at the Battle of the Somme.

An occassional actor and sometimes TV special guest, Lemmy was involved in more side projects and musical collaborations than almost anyone in musical history.

In an era when 'z' list celebrities, reality TV shows and wannabe boy bands compete for tabloid coverage of their wild times none of these tiny intellects could survive an hour with Lemmy let alone spend a night on tour or on the town with him.

He lived the life he chose and recently declared that when he died he would have no regrets. Ultimately at the age of 70 that hard living three score and 10 caught up with Lemmy. While one can never truly say what another person thinks in the final moments it is hard not to believe that Lemmy had no regrets.

We in the rock, punk and metal communuties are lessened by his passing, but Lemmy acknowledged what he had undertook in life, when he reflected on the death of Phil Taylor this year:

"I think this rock'n'roll business might be bad for the human life." 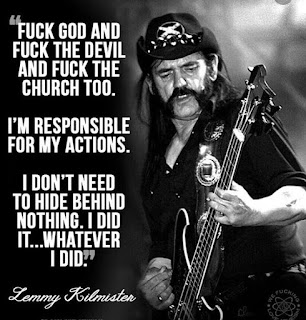