LIVE REVIEW: Blackwater Conspiracy prove there is no covering up great rock

SOMETIMES you have to wonder is there something in the water here in Northern Ireland that sees this few square miles on the edge of western Europe produce so many great rock bands.

Whatever the case the show by Blackwater Conspiracy on Saturday, 28th November in Belfast's Pavilion was cause to celebrate great rock 'n' roll from Northern Ireland.

A three-act evening opened with Philip McCarroll of Payola playing an acoustic set. Playing songs from his 'Sunday Night Fever' ep the vibe was mournful and melancholic, but measured in delivery.

'Cathedral' was among the stand-outs from the set, but any hint that the set was going to be a downer was scotched with the unveiling of new song 'Love and Money', which has the air of a song destined to be a favourite.

Bracketing Philip and BC were rockers Storm Tree. The heavy blues with Celtic rock edges probably deserved a bigger audience, but with the heavyweight world title clash between Klitchko and Fury being shown in the venue's smoking area people drifted in and out despite the outstanding musicianship on display.

With such craft in playing the band seemed a little cramped and a more expansive stage would have allowed them to be visually as well as aurally impressive.

Blackwater Conspiracy emerged from Million$Reload this year, the core of that band intact, but with a slight change of direction. The reasons for the change were explained in an interview by Nigel Jackson on this site some months ago, but has remained is a strong sense of what makes a great rock song and set.

Phil's voice remains as powerful as ever, and his rhythm guitar playing now sits ever more comfortable along side BAM's lead work.

'Waiting on Hollywood' is the perfect opener for a set peppered with songs to sing along to and songs to revel in.

With Kevy's keyboard work adding to the sense of rock roots groove, tracks like 'Decadent Highway' and '85 Rockstar' roll along as if the rock music of the 60s and 70s has been taken, given a dust-off and new shoes for the second decade of the 21st Century.

Almost under stated a little in the mix, it would be remiss not to mention the importance of Kie (bass) and Fionn (drums) to the Blackwater Conspiracy cause. Consistent, tight and with the flourishes added in just the right places.

'Penny for Your Dirty Mind' has become one of those songs that you can't shake from your mind, but appropriately given the events in Paris two weeks earlier the M$R plea for peace 'Bullets in the Sky' was given a rightly rousing reaction from the crowd: worthy and wonderful.

Blackwater Conspiracy are proving to be one of the highest quality bands from Northern Ireland, and it is just that they are building ever more fans; and with sets like that at the Pavilion the base and buzz around BC will continue to grow ever larger and ever stronger. 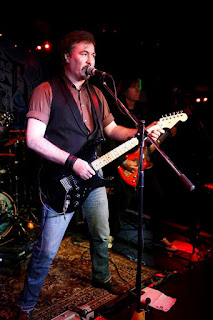 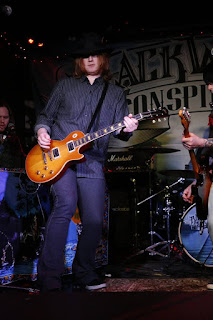 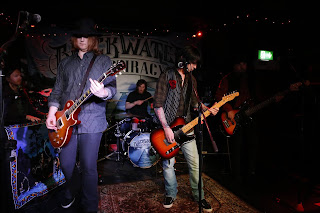