SO, did you enjoy Whitesnake's set in the SSE Arena Belfast? We did (review here) and as you may begin to plan next year's festival dates you may want to consider Ramblin' Man Fair in July.

Whitesnake will be one of the headliners. With them on the Classic Rock main stage will be Europe.

Below is the official press release with quotations from Coverdale, Tempest and festival owner Chris Ingham. But above all, when we attended Ramblin' Man Fair last year to review it for Devils Gate Media we loved every second. 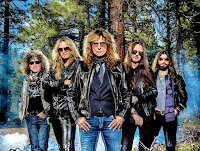 Mega platinum WHITESNAKE, the legendary rock’n’roll band founded and formed by DEEP PURPLE singer David Coverdale are proud to announce their exclusive UK Festival date as part of the 2016 "THE GREATEST HITS TOUR" which will feature their biggest hits & songs from SLIDE IT IN, WHITESNAKE (1987) AND SLIP OF THE TONGUE records.

Blowing audiences away with their stunning, energetic live performances, Whitesnake have just completed a comprehensive world tour in 2015, including a Sell Out Arena tour in the UK & Ireland with Def Leppard, whilst promoting their most recent studio offering, THE PURPLE ALBUM.

After leaving DEEP PURPLE in 1976 Coverdale formed the original WHITESNAKE in 1978, and began a journey that has taken him from the early heavy blues rock of the late ‘70s with albums like ‘TROUBLE’, ‘LOVEHUNTER ‘READY AND WILLING’ and ‘COME AN’ GET IT’ through to the explosive hard rock of the revamped ‘SNAKE sound with the multi-platinum ‘SLIDE IT IN’ & 1987’s self-titled mega-million-selling smash-hit album, ‘WHITESNAKE’.

David Coverdale...Whitesnake Lead Singer "We are truly excited & looking forward to playing at the Ramblin' Man Fair in 2016 on what will be our 'Greatest Hits World Tour' & most likely my personal 'Farewell to Arena Rock' after over 40 years of writing & performing rock music. As I write this we are finishing our incredibly successful touring cycle of 2015...CO Headlining a monster UK tour with Def Leppard, releasing our tribute to Deep Purple Mark 3 & 4, Whitesnake 'The PURPLE Album' & touring this incredible world, I look back on an amazing, memorable journey of 4 decades of fun performing for millions of people. Whitesnake is singularly honoured to headline The Ramblin' Man Fair, looking forward to some British Fun in the sun... See You In 2016!!!"

A legendary name of a legendary band. Three decades in, millions of albums sold and anthems such as "The Final Countdown" and "Rock The Night", Europe are coming to Ramblin' Man Fair off the back of their critically acclaimed 10th Studio Album ‘War of Kings’. The band recently picked up the "Comeback Of the Year" Award at 2015’s Classic Rock Awards.

"We're having an amazing 2015 with receiving a Classic Rock Award and touring extensively promoting WAR OF KINGS. Now we have the absolute pleasure in announcing that EUROPE will be playing RAMBLIN’ MAN FAIR together with WHITESNAKE on the 23 July 2016. Always an enormous pleasure sharing the stage with the great man himself David Coverdale and his entourage! We've been following Ramblin’ Man Fair with great interest. It's a festival that makes sense musically and is gaining respect amongst both artists and audience. Bring on RAMBLIN’ MAN FAIR 23 July 2016! It will surely be one of those classic rock evenings that will be talked about for donkey's!" - Joey Tempest

Ginger Wildheart
One of the most consistent UK songwriters of the past 25 years. Throughout The Wildhearts and a host of solo albums Ginger will be rocking tracks such as "Caffeine Bomb", "29 x The Pain", "Sick Of Drugs" and "I Wanna Go Where The People Go". He recently dueted with Courtney Love on "Honor". After his record breaking pledge campaigns and critically acclaimed albums ‘555%’ & ‘Albion’, we can’t wait to see him perform at next years festival.

One of the most successful prog rock bands of the 60’s and 70’s and one of a few number of artist to sell 10 million singles with their debut track ‘A Whiter Shade of Pale’. Procol Harum will be a fantastic addition to Ramblin’ Man Fair 2016 and we can’t wait to see them headline our Prog Stage.

Hayseed Dixie
Our country stage headliners Hayseed Dixie are one of the most exciting critically loved bands on the bill. "Superlative musicians with a deep love and understanding of the dynamics of both modern rock and ancient hillbilly music" - The Times

Walter Trout
Accomplished, unique, passionate. Walter is a contemporary blues master. With a career spanning over 45 years he is one of the true greats and fathers of Blues music and we’re honored to have him as a special guest at next years Ramblin’ Man Fair.

Ramblin’ Man Fair is the must see event for discerning festival goers. A quality musical line up with a number of UK exclusive performances. The event will be a unique experience set to become a staple of the UK festival calendar.

The festival will take place in the beautiful Mote Park in Maidstone, Kent – the garden of England. The park is one of the largest in South East England with more than 450 acres of mature parkland and a 30 acre lake. With multiple travel links via train (Ashford International, Maidstone East and Maidstone West in close proximity) and road (with three park and rides available around Maidstone). The festival site is also perfect for European festival goers with easy links to the London airports, the Channel and Ferries to and from mainland Europe.
Ramblin’ Man Fair is now under the ownership of new music event company Spirit of Rock, the first IP acquisition activity by ex Team Rock and Classic Rock/Metal Hammer magazine Managing Director Chris Ingham. Spirit of Rock is a division of RFS Entertainment.

In a statement Spirit Of Rock said, "Now under new management, year two of Ramblin’ Man Fair will be even bigger and better than year one. The festival will concentrate on a core offering of classic rock, prog and Southern rock music showcasing both legends and new talent. Ramblin’ Man Fair will come with a new emphasis on great food, fine bourbons and the colourful world of rock culture."

Spirit Of Rock Director Chris Ingham adds, "Ramblin’ Man 2016 is my first venture with the Spirit of Rock, the company I formed in partnership with RFS entertainment after twenty years at Classic Rock and Metal Hammer magazines and latterly, with TeamRock. I actually attended the 2015 concert in Mote Park and I was hugely impressed not only by the diversity of the artists but also the great atmosphere and the sheer potential of the brand.
It’s time to create a music festival that appeals as much to the foodie as it does the rock music fan in us all. Let’s have Classic Rock, Southern Rock, Prog, Blues and Country music stages alongside great outdoor BBQ food, fine bourbon whiskies and barrels of real ale in the heart of Maidstone’s beautiful Mote Park. Knowing whom we have booked to play and alongside these new areas Ramblin’ Man 2016 will be a very special weekend indeed, don’t miss out." – Chris Ingham