ALBUM REVIEW: Hard rock with an edge from Norway's Spitfire on Fuel to Burn release

WHAT is it with Norway? As well as its reputation for producing Black Metal par excellence they produce consistently great hard rock bands.

Further evidence of this comes from Spitfire who have just released their latest album 'Fuel to Burn', an unpretentious platter of heads down rock and riffage.

This is unadulterated rockin' as smooth as silk bed sheets and as spiky as a cactus back massage. From the opener title track, through to closer 'Down' this is an enjoyable package: put your brain in neutral and wallow in this with beer in hand.

At times some of the lyrics are cringeworthy, and it is appropriate to say there is nothing 'new' on this release, but what Spitfire have done is to pull all the classic hard rock elements together and let loose eight tracks of sheer rock joy. 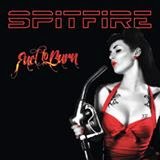 'Damned if You Do' has an 80's mid-tempo vibe, 'Nightmare' has a roll and delicious elements.

Beffen, Iggy, Bob and Nicky have captured the elusive element that enjoins 1970's rock with the sleaze and lust of LA in the 80s. 'Gimme Some' could sit comfortably in either decade, but is resoundingly a 21st Century slab of rock, with tasty guitar elements.

However, the outstanding track is 'I'. Real passion has been injected into this. It broods as it opens, reveals an inner heart and develops into a stormer, with a groove that will see grunge bands hang their heads in shame that they never achieved this level of angst driven anger.

While closer 'Down' can sit comfortably in any hard rock afficianado's playlist the contrast is the ever-so-slightly contrived 'Dogfight', which may work as a live track, but spills forth too many clichés.

Taken in the round Spitfire have, like the aeroplane they are named after, produced a good, if flawed release. The Spitfire didn't win the Battle of Britain (Hawker Hurricanes shot down more German planes than the Supermarine Spitfire) but like their namesake these Norwegian rockers deliver what is expected if classic hard rock...and more.