THREE piece Glaswegian hard rockers The Toi have finally released an album they had intended to unleash two years ago - and its been worth the wait.

For those that haven't heard of them, the band is a three piece hailing from Glasgow featuring Paul Healy (vocals/guitar), Andy Carr(bass/guitar/vocals) and Stevie McLay(drums/vocals) who take their name from an old Glasgow word for gang.

Having established a good live reputation in their native city 'Water into Wine' is their first album release. Originally meant to be released in 2013 several setbacks have seen its delay until now but it was worth the wait. 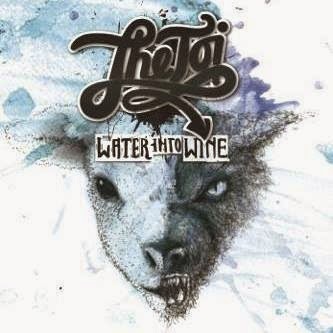 'Water into Wine' is a rock/pop album that will have cross appeal and is melodic and menacing at the same time. With Dan Hawkins (The Darkness) at the helm you should expect nothing less; with catchy hooks and big choruses throughout. With a nod to Bon Jovi and Bruce Springsteen among others you get the picture.

Songs such as opener 'Get it on' , 'Come Alive' and 'Staring at the Sun' showcase the hook and chorus element while 'Cold in the Night' has a straight up Jovi chorus.

'Till the Morning Comes', 'The One' and 'I Think about You' (with a great riff and bass line) are pure hard rock and spit and snarl with a few melodies thrown in for good measure.

'Water into Wine' shows the bands ability to write hard hitting lyrics as it's about a Catholic Priest they knew (and doesn't pull many punches). It also has a bit of a Mama's Boys vibe to it which is all the better.

With 'Down by the River' the Toi go all Springsteen on us but with a bit more balls and add in a bit of a Tommy & Gina story-line making this seven minute closer an epic which must be a live favourite.

Overall a very decent debut album with excellent guitar work throughout and as said before should appeal to a wide audience.

The Toi may well be the best thing to come out of Glasgow since Billy Connolly. Watch out for them.


Review by Andy Gillen.
Posted by Jonny at 9:02 pm

Email ThisBlogThis!Share to TwitterShare to FacebookShare to Pinterest
Labels: The Toi, Water Into Wine