DECADES after its inception, punk still has the power to shock, inspire and be thought provoking; Saturday night's gig in Voodoo certainly proved that. French-born, South African-raised The SoapGirls swung into Belfast as part of their UK and Irish tour and put on the type of show rarely seen in punk: as equally arresting visually as they are sonically, with serious attitude and proper, feminist sass.

How often does one get to say that after a punk gig?

Setting the pace was first local support act, the eye catchingly-named A.R.S.E, for whom punk will always be set in the Seventies and the likes of Bad Manners and Stiff Little Fingers will always be kings.

Not that there's anything wrong with that; their bolshy brand of oi punk is infectiously catchy and actually rather fun, with front man Petesy Burns in fine form, at one point jokingly admonishing the crowd for some rather unenthusiastic applause: “at our age, if we do four songs in a row we deserve more than that!” he quips.

Their half hour set fairly rips along, including some original tracks ('In Your Face', 'Religious Wars') and covers (The Jam's 'Down In the Tube Station at Midnight' and Dead Boys' 'Sonic Reducer').

Clearly more a labour of love than vast money spinner, A.R.S.E are nonetheless a dynamic and entertaining band who take to the job of warming up the crowd with glee, and do it well.

Second support Madhouse are in equally fine fettle: with a hefty dollop of rockabilly thrown into the mix, they are boisterously engaging right from the word 'go' – there's even a mammoth double bass up there on the tiny stage. With buzzsaw riffs aplenty and a lively Stray Cats vibe, their set is gloriously over the top.

Singer Billy Riot begins the show dressed as gangster on a yacht circa 1984 and ends it in trousers and shoes only (even the sunglasses come off) but keeps his tongue firmly in his cheek the whole time, cheekily introducing songs such as 'Bend Over, I'll Drive' (“this is a song about getting sucked off in a car”) and final number 'Too Drunk To Fuck' (which needs little introduction, to be fair) with a glint in his eye. By the time that final track rolls around they have thoroughly entertained the crowd and surely gained a good many new fans.

All of which means that by the time the diminutive Soapgirls take to the stage, the room is full of wide smiles and a buzz of anticipation.

Theirs is a sort of Riot Grrrl, riffy go-go punk sound, all angelic voices with a heavy dose of snarl and attitude - but when vocalist/bassist Millie cranks it up she unleashes a scream that would comfortably fit onto any metal album.

Their seventy minute set runs the gamut of emotions, from 'fuck you' number 'Rather Be Dead', to the slinky 'Original Sin' and even the melancholy, heavy 'Bury Me', a song about losing a loved one to cancer.

In between, the girls' banter and total ease onstage warm the room and create a real bond with the audience, who respond with loud applause and passionate singalongs. Highlights include proper Riot Grrrl punk rock tune 'Sam's On Crack', vitriolic final number 'Bad Bitch', during which they invite all the 'bad bitches' in the audience onstage, and a towering, rage fuelled 'Drag You Down to Hell', with its ska punk-infused chorus.

A long and effusive 'thank you' from the two of them follows 'Bad Bitch', and the show is over.

Quite literally 'sisters doing it for themselves', their own way, on their own terms – and fuck the haters – The SoapGirls prove yet again that punk is NOT dead, and that women can kick as much ass, and be as fearless and individual as any male musician you care to compare them to. Long may it continue, too. 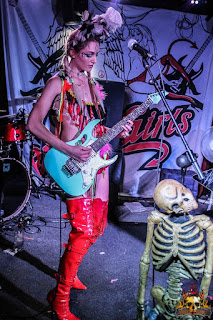 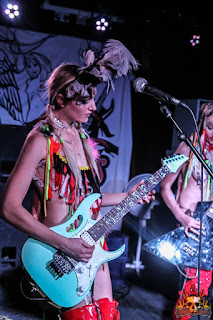 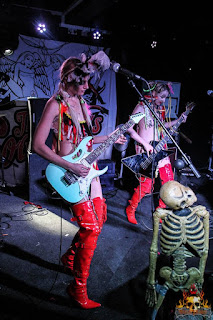 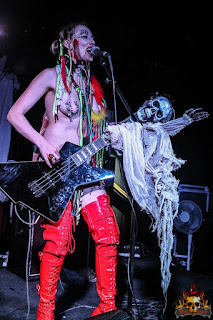