AS a young thrash band it can be a hard path to carve in a crowded marketplace, but so far Scimitar have earned their stripes and come out strong. However, on their début release 'Where Darkness Dwells' they have may missed an opportunity.

Don't get us wrong - there are (leaving aside the brief intro 'Sands of Sorrow) six very strong original tracks that reflect their ethos and talent.

But, an unnecessary cover of 'Ace of Spades' and a live version of the titular 'Scimitar' means that what could have been a more complete album. Two more originals could have avoided the album fading out on a whimper compared to the blast of the rest of the 'Where Darkness Dwells'

But, enough of the negative. There are some outstanding tracks on it. 'Behead The Beast' is as much a stormer on here as it is on stage. 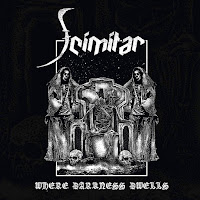 Keeping true to their mélange of US, Teutonic and good old UK and Irish thrash there is pace and power on 'Behead The Beast', as there is on 'Unholy Forger'.

At times the mix doesn't come out strong, but it is a minor niggle, with the likes of 'Cursed City' and 'Back to War' rollicking along at a good tempo.

As an experienced live act Scimitar have managed to capture the energy of their performances, and as always their musicianship is exemplary. Jonny tears up the rule-book with his passionate singing, while John riffs as if his life depends on it, added to solos that are not only impressive, but match the sentiment of each track.

The rhythm section of Chriz and Ryan are probably one of the best on the scene, not only keeping songs rolling along, but using their instruments to punctuate and lift the sensibility of the album.

The cover of 'Ace of Spades' is unnecessary and would have best been reserved for live outings...

Closer, a liver version of 'Scimitar' from the Thrashersaurus show in Norwich is well executed, but whether it adds to a début album is open to debate.

What the band have achieved on 'Where Darkness Dwells' is some excellent tracks, let down by not adding more material.

That said, this bodes well for Scimitar's progress up the thrash ranks.

Where Darkness Dwells is out now on CD and as a digital download. 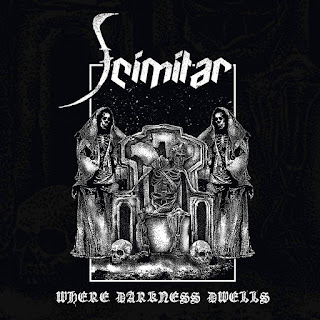 Email ThisBlogThis!Share to TwitterShare to FacebookShare to Pinterest
Labels: Scimitar, Where Darkness Dwells