CRADLE of Filth -  remember them? Scary band back in the day? Something of a joke at times? More line-up changes than Deep Purple? No longer 'black' enough for some? Well some of that may be half-true but believe us they are back with a bang, and the doubters will flee or convert.

While recent albums have been good, they haven't been great. But 'Hammer of The Witches' is a storm of pure Filth.

Something you get the feeling Mr Filth himself knows...

“I think this album will definitely surprise a lot of people,” Dani said. “It’s really very intense. There’s always that argument, ‘CRADLE haven’t been black metal since the Dusk days!’ and all that utter crap. These are just tags that people impose on you, rather than the other way round. We’ve always been a heavy metal band that’s been excited, involved with and espoused the occult and the dark side.

Chock full of mature interpretations of the CoF sound, new guitar duo Richard Shaw and Ashok have brought new life to the band's sound. The tracks 'Deflowering the Maidenhead, Displeasuring the Goddess' and 'Blackest Magick in Practice' showcase some of the best riffing and soloing heard for some time out of Cradle of Filth...and will demonstrate to many acts how it should be done.

Daniel Firth's  bass is locked tight and solid to Martin Skaroupka's explosive drums adding to the soundscape of what has fearsome tracks by the bucketload. The keyboard work and vocals from Lindsay Schoolcraft bring the added dimension to the sound that makes up the backdrop for what is one of Dani Filth's best performance for some time since 'Cruelty & The Beast'.

Perhaps it was the subject matter that brought the best out of the singer's performance. 'Hammer of The Witches' harkens back to the vicious witch hunts in 16th and 17th Century Europe, only this time the covens have the upper hand, something explained in the sonically thrilling title track.


“This is perfect subject matter for us,” said Dani. “That dreadful book, the ‘Malleus Maleficarum’… it’s about the torture and persecution of witches and how to legally punish them.
That was the church's militant hammer against the witches. 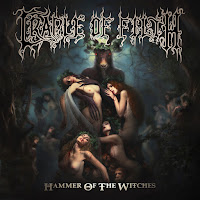 "Our interpretation is a hammer for the witches, so the album title is about payback for decades of torment. The album is lavishly and beautifully illustrated by Latvian artist, Artūrs Berzinsh, and it’s probably the best artwork undertaken for COF and that’s saying something.
"I worked really closely to alleviate him of some really beautiful but horrifying images, done in a neo-classical, pre-Renaissance style, but with the subject matter set and what’s actually emerged from Artūrs.. well, it’s all a bit rum! So the artwork encompasses the whole record and lacquers that crepuscular theme, that medieval vibe.”
Somehow you know Dani has more than a mischievous twinkle in his eye when he was dictating that quotation to the record label...

But the blurb and the hype that resonates around any Cradle of Filth release is more than justified. There are elements to this release that just explode. On 'Right Wing of The Garden Triptych' a brief 70's synth sound gives way to gentle piano and Lindsay's intro lines before it soars - weaving from full on speed to mid-paced roller-coaster, keys and guitars offering aural attacks in equal measure with Dani sounding pained and angry in equal measure to Linday's spoken counterpoints before the whole thing pauses for breath for a brief second before exploding again.

Almost every track on display here deserves the same analysis in each review, but best to let the listener undertake that for themselves. It will be an exercise in pure metal pleasure; an exercise that allows each person to wallow in the delightful excess.

In the quotation at the top Dani talked about being a metal band that was "...excited, involved with and espoused the occult and the dark side". What is evident on 'Hammer of The Witches' is a band that has brought excitement back to Cradle of Filth and produces a release that is Cradle of Filth back to its nastiest best. And that is really fun place to be!

Email ThisBlogThis!Share to TwitterShare to FacebookShare to Pinterest
Labels: Cradle of Filth, Dani Filth, Hammer of The Witches, Nuclear Blast