THERE was a time when the only music forms tackling political issues (small-p) were the hippies of the sixties and the punks of the late seventies. With all but a few exceptions they have fallen off their pedestals or become too old to rattle the establishment any longer. 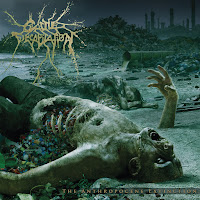 With a few notable exceptions - Stiff Little Fingers for example - the mantle of having a swipe at the establishment, and challenging the norm has been handed to some of the more extreme forms of metal and hardcore.


But there has been one metal band that challenge the norm, the accepted wisdom and the scabrous nature of the political classes it is Cattle Decapitation. They have consistently tackled the tough issues: environmental destruction at humanity's hand; animal testing; genocide and many other issues.


The environmental calumnies that are causing climate change were a focus of 'Monolith of Humanity' in 2012/13 and now Travis and company have looked forward to the consequences of not addressing environmental concerns on their new release 'The Anthropocene Extinction'.


Before you go hunting on the 'Tinterweb trying to find out the definition of 'Anthropocene' it is the accepted term for the geological period from the Industrial Revolution to the present day when man's impact on the "lithosphere" has become evident. Some climate scientists say the point when the damage will become irreversible is near at hand.


In the dystopian world envisaged by Cattle Decapitation on 'The Anthropocene Extinction' humanity has all but destroyed the ecosphere of our home planet, as foretold on 'Monolith of Inhumanity': but if you think CD are some sort of navel-gazing eco-twats wandering around like crustie protestors you are dead wrong. Death Metal dead wrong!

As usual the band bring the full force of their message in a musical tapestry that is dense, violent and filled with all the diverse range of death metal.

Like 'Monolith of Inhumanity' they show a growth in what they are prepared to attempt, and the flashes of melody they use are appropriate punctuation amidst the pummeling.

Of course when reviewing an album like this 'pummeling' is somewhat a cliché, but from opener 'Manufactured Extinct' this is a battering of your senses.

'Plagueborne' stands out with its ominous intro through to a varied attack that showcases all of Dave McGraw's varied drumming talent and Travis' utilizing his skills with subtle tones and melodies.

No review of a Cattle Decapitation album would be complete without mentioning the synchronous relationship between Josh Elmore's guitars and Derek Engemann's bass, which leads the way on the breakdown on 'Clandestine Ways (Krokodil Rot)' - a scathing indictment of vivisection.

The process of coming up with the album is revealed by Travis:
"We've never  actively  said 'let's do a black metal part' or 'let's  do  a  brutal blastbeat part!'We base everything on feeling, but we definitely focused much more on fluidity within the songs and making the record flow much more than on some of our earlier releases."

There is indeed a lot of variety on this album, yet that fluidity manages to manifest itself, even on the slow tragic tale told on 'Ave Exitium' and the instrumental 'The Burden of Seven Billion'.

The Anthropocene Extinction also features contributions from some notable guests, with Tristan Shone (AKA Author & Punisher) contributing to 'Plagueborne', Bethlehem's Jürgen Bartsch providing a spoken word part - in German - for 'Pacific Grim, and Phil Anselmo on 'The Prophets Of Loss'.

"We originally didn't plan on having any guest appearances, but when the opportunities presented themselves while we were in the studio, they just seemed to fit perfectly and it was great we were able to actually get them involved," said Travis.

"We had played the Housecore Horror Film Fest in Austin and we shot the shit with Phil,who is a very cool guy, but it was our friend John Jarvis (Pig Destroyer, Fulgora) who reached out to him - without telling us - and then told us he wanted to be on the record!"

"The part you hear him do on that song is exactly what popped into my head as soon as we learned he was going to do something with us, and really all of those guys contributed something so cool to the finished product."

Put all the quotations aside, put aside the Cattle Decapitation oeuvre, and really listen to this album; and that's not having it on in the car or playing as you tweet - really listen to it.

Here is a band that refuse to pigeon-holed, and display a level of maturity many others should learn from. On display is a band that embraces the death metal tag, that allows grind and black metal to sit comfortably on this album together with flashes of melody.

'The Anthropocene Extinction' is a stormer - worth many repeated listens!