BORN in 2014 Infected Dead have been making serious waves since their inception. Spanning six tracks this EP showcases what Infected Dead have in the tank from the first note to the last. Strap yourself in, you're about to be thrown about like a rag doll.

The opening track 'Book of Dead Names' is an utterly creepy instrumental track consisting of an eerie music box tune and distorted and demonic voices. It is absolutely spinechilling. What a way to set the mood for what's to come.

The second track 'Archaic Malevolence' is a tour de force of grinding technical riffing and tight drumwork. The basslines are sharp and clear, the guitars are crisp and unashamedly brutal and the drums fire on all cylinders. The vocals jump between guttural snarls to tortured screams with vicious energy and the guitar solos would put some death metal veterans to shame.

Next 'Resurrectionist' jumps right down your throat with sheer ferocity and doesn't let up at all. Planet destroying drums, sweep picked leads, technical and melodic rhythms and and truly sickening vocals shake you to your very core.

It's wonderfully composed, balancing unrelenting heaviness and melody perfectly. The key words here are "brutal" and "razor sharp". This track will choke you into submission. 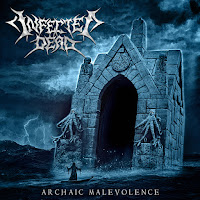 The fourth track 'Invocation of Unspeakable Gods' is absolutely devastating. It's the musical equivalent of being thrown into a cement mixer filled with nails, battery acid and meth addicted raccoons.

You're not gonna come out the same way you went in...

The riffs are crushing and catchy as hell, the double kick drumming adds to the earth flattening noise, the bass is punishing and the vocals are up there with the all time death metal greats.

Track five 'Forced Existence' throws you into a barrage of quick technical riffs and supersonic blastbeat drumming. The output is relentless, there's no slowing down and the intensity doesn't waver in the slightest. It's disgustingly heavy, enough to splatter you into paste, and that solo will melt through you like molten lead. The vocals are absolutely inhuman.

The sixth and final track 'Samsara' is a testament to technical excellence in its most chaotic form with unbelievable riffs, slamming bass and hyperspeed drumming. The vocals are hurled out with such energy it's positively terrifying. It's breakneck from start to finish, packed with fantastic lead work

It's a song that'll have you swinging your head and most likely the neighbours cat around as a weapon. A seriously strong end to an amazing EP.

Keep your eyes on Infected Dead. 'Archaic Malevolence' sounds like Aborted and Black Dhalia Murder conceived a twisted hellspawn under a blood red moon and is a true indicator of just how good modern death metal can be. We're expecting great things in the future from this brutal band. 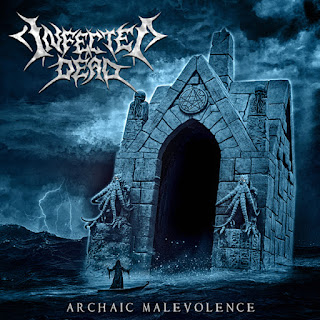