ALBUM REVIEW: The Soap Girls kick it up on impressive début Socitety's Rejects

WHEN punk hit the music scene in the Seventies like a grenade, it differed from rock and metal in that it encouraged women to join a band, go to gigs and otherwise participate as equals.

That led to the formation of bands such as The Slits and X-Ray Specs (fronted by the inimitable Poly Styrene), which then filtered into goth (Siouxie Sioux and the Banshees), rock (Hole) and even the darker side of pop (The Pretenders), with metal lagging behind but no2 finally starting to catch up.

The 'Riot Grrrl' underground feminist punk movement of the nineties added another layer, with women becoming even more free to express themselves however they damn well pleased. 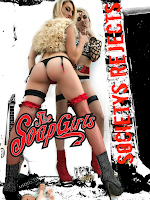 Punk in the 21st century, although almost unrecognisable from its humble beginnings, is still the best platform for talented female musicians to continue this freedom of expression.

Take the subject of today's review, The SoapGirls. French-born but raised in South Africa, the sisters - Ca(Millie), vocals and guitar, and Noe(MIE), vocals and bass - derive their name from their childhood activities of selling soap and performing on the street. Somewhere along the line they became fell under the spell of punk rock, and decided to kick their performance up several notches.

The resulting sound is what they like to call 'revolt rock', described as “a kick in the face followed by a kiss”. They dress provocatively (“society tells you to cover up and be decent, so in true SoapGirls fashion we weren't gonna do that”), sing about politics and ex boyfriends with equal vitriol, and, with début album 'Society's Rejects', have created an album that will simultaneously kick your ass and blow you away.

The simple punk backbone of the titular opening track barely indicates what's to come: catchy and mouthy, it's the Riot Grrrl sound updated, yet would sit comfortably on the soundtrack of any classic bitch movie (Heathers, etc). The brash and bolshy 'Jonny Rotten' is next, and proves that these women can actually sing, fluctuating between a sound reminiscent of Australian duo The Veronicas during the verses and Courtney Love's Hole in the chorus.

Not content with drawing together influences such as the aforementioned Hole, Joan Jett and Gwen Stefani (a 'seriously fucked off and seeking revenge' Stefani, that is), there's also a plethora of other musical nods here, too.

Several songs contain a slinky, basstastic Seventies groove (such as 'Step Outside'), while elsewhere there's the pure radio rock of 'Bury Me'; a perky Fifties bounce ('Party In  Hell'); reggae and ska (ballad of sorts 'You Hate Losing' and 'Drag You Down', respectively); and even metal: check out the screams and wall of sound in 'Break You', whose “You fucking asshole!” intro immediately pegs it as a furious break up song.

They also cleverly combine sweet, saccharine sounding vocals with dark lyrics and punk fury ('Party In Hell' and 'Rather B Dead', another break up tune whose snarling riff and angelic Voice of the Beehive harmonies (remember them?) clash magnificently with the awesome “fuck you” flavour of the lyrics).

There's even a hefty dollop of grunge rock in album highlight 'Original Sin', which sounds like a defiant Joan Jett singing over an Audioslave track: all distorted, heavy and sexy at the same time.

Far from being 'just' a punk band, The SoapGirls prove on their debut that there are hidden depths – and certainly a wealth of talent – beneath their simple Riot Grrrl premise. Fantastically varied, hugely enjoyable and brilliantly catchy, Society's Rejects is an album firmly standing in the present, but with roots delving into the past and an eye on the future. Consider the torch well and truly passed on.

Email ThisBlogThis!Share to TwitterShare to FacebookShare to Pinterest
Labels: Society's Rejects, The Soapgirls