WHEN it comes to live shows few can capture the attention in the same way that Conjuring Fate do, but when committing songs so beloved by those who have seen the band to an album then it is a serious challenge. Could the CF team manage that feat on their album 'Valley of Shadows'?

Of course they can - did you ever doubt it?

Converting the energy and intensity from the live versions has been achieved what seems effortlessly, but that belies the work that has gone into produce an album brim full of superb tracks.

You could describe it as classic metal, NWOBHM inspired, or some other descriptive rubbish, but that would detract from what Conjuring Fate have captured on this release. There are immense choruses, searing melodic guitar lines, rolling rhythms, humour and seriousness all laid out to marvel in. 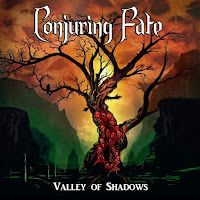 Sure, the influences are there for all to hear, not least in the riffing á la Maiden etc, but it is never a slavish take on that early era of the Irons and their kin. Rather it brings it bang up to date, adds elements of thrash, and the result is something that packs 11 songs of pure metallic joy.

The pacing of the album means that there is a sense of dynamism on the album. Whether it is the rampant roll of 'Dr Frankenstein' and 'Land of the Damned', or the measured fury of 'Trust No One' this is a complete picture of a band that has risen above being local contenders and now will be attracting attention from further afield.

And, also from further afield Conjuring Fate snagged a couple of guests for the release. Neil Fraser of Stagma/Rage of Angels lays down a guest solo on the re-worked 'Backwoods Witch' and Mordred's Scott Holderby provides guest vocals on 'Trust No One'.

And, it is the re-working of familiar tracks that really elevates 'Valley of Shadows'. The aforementioned 'Land of the Damned' has a tweaked mid-section. Also, the three tracks from the House On Haunted Hill ep release have been given a dusting down, a good shake up and sit proud to conclude the album.

The performance throughout from Phil Horner and Karl Gibson on guitars is faultless. There are so many places to identify, but the work on 'Chasing Shadows' is an exemplar of what can be achieved.

In terms of energy you can picture Tommy Daly's congenial and creative stage presence on each of his vocal lines, and the passion for each lyric that he coaxes from his voice box.

'Primal Desire' has a contemporary feel in its structure and Daly tears each note from himself with obvious passion. And, there's a tasty solo there too...

There is not a bad track on this album in terms of execution and production. For an unsigned band to accomplish this speaks volumes about the talent within Conjuring Fate.

Keeping every track nailed down, Steve Legear (bass) and Bogdan Walczak (drums) are a formidable rhythm section, whether it be metronomic sensibility or flourishes they are provide the beating heart on 'Valley of Shadows' as displayed on the immense 'Apocalypse'.

From the opening track 'Our Darkest Days' outrageous intro effects to the last note this is an 11-song album that should - no must, be played loud.

We doff our caps to Tommy, Phil, Karl, Steve, and Bodgan. One senses that the quality here will propel Conjuring Fate way beyond the parochial slumber that many acts find themselves confined to. Already the 'Dr Frankenstein' (and accompanying video) was being hailed by reviewers across Europe. The album is sure to receive the same acclaim.

'Valley of Shadows' keeps giving with each play, keeps rewarding the listener...and we have pretty much had to suspend a lot of our other work with it being on repeat almost constantly. 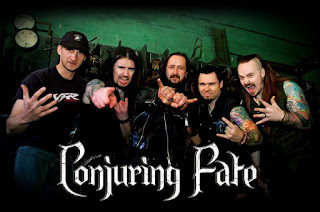