ALBUM REVIEW: Bonafide strip it down to damn fine essentials on Denim Devils

SWEDEN - like all the Scandinavian countries seem to have an excess of bands, pounding out a range of metal and rock genres - and leading the hard rock charge from Malmo are Bonafide, who have just released a stormer of an album in the shape of 'Denim Devils'.

There is always a case for heads down rock 'n' roll fun and Pontus Snibb and his compadrés deliver that in shedloads on the 12 tracks on this OffYerRocka release. Damn  - it's hard not to raise a pint to their efforts.

They take the basic hard rock template and give it additional umph - just listen to 'Get A Grip' and the riff melds into a melodic chorus to die for, and a sweet as a six-string nut measured solo.

Their last release 'Bombo' is a hard act to follow, but somehow they have managed it. All the songs were penned by Snibb, and recorded in bassist Martin Ekelun's own studio.

Snibb echoes our sentiments when he said: "This record has a tougher live vibe and sound than the previous one, as it was recorded almost live in he studio. 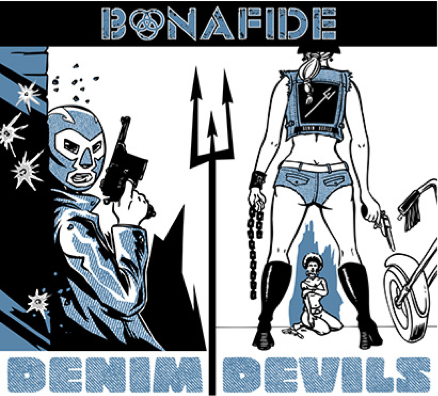 "We wanted to get as close to a live show as possible - to capture that magic that happens on stage when everything's coming together."

Throughout that live vibe stays to the fore on the likes of '50/50' and 'One Kiss';  a track Snibb said: "I recall thinking about Foo Fighters meets Weezer when I wrote that song last spring."

That is perhaps to under-estimate a great track; but then again the track prior to that, is Airbourne, DC, and The Answer all wrapped up in four minutes of sheer fun - 'Rock 'n' Roll Lifestyle' is a balls to the wall rocker: never mind the clichés, when a song is this much fun it's best to take those clichés and enjoy every second.

But that might suggest that Bonafide are one-dimensional in their take on hard rock. Quite the reverse. From the tender 'Missing You' (which is excellent!) through to the measured 'The Game' and closer 'This Ones for You'.

That song is a tribute to fans, and as every fan who has seen Snibb, Rosell, Ekelund and Matson live will know that they push every fibre of their rock 'n' roll dark hearts into performing for fans.

Bonafide are the sort of band that the mainstream media - and the rock media - tend to ignore in the UK. That's their loss -  because those in the know appreciate that Bonafide are part of a market they'll never understand, while we in the know glory in it. Denim Devils? A damn fine album from a damn fine band.