LET'S face it, right up front, no waffling, no bullshit - power metal can disappear up it's own ass; filled with pomposity, pretentiousness and prat-ishness. Thankfully, on 'Beyond the Red Mirror; a bombastic Blind Guardian avoid the traps of the cliché and complacency.

Of course, that doesn't mean that they are attempting to re-invent the wheel - they're just making it run smoother.

From their formative 'speed metal' days Blind Guardian have natured, grown and became pioneers of the power metal vanguard; with symphonic, multi-layered, magnificence.

While their 2010 release 'At The Edge of Time' was a massive success for Blind Guardian commercially (number two in Germany's album charts, and entering the US Billboard charts) we tended to view it as a bit 'meh'

But, the main attribute of Blind Guardian is that they refuse to stand still.

Guitarist André Olbrich said: "We want to surprise and impress with our music. Nowadays, music tends to be arbitrary and predictable. But we want to keep developing our music."

And, predictability is not something Blind Guardian do...three classical choirs (from Prague, Budapest and Boston) and two 90-strong orchestras make for a heady mix. 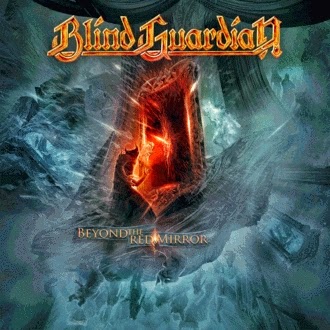 Yes, they've been there before...

"Seeing how orchestra songs come alive is a very special and intense moment for us," said Blind Guardian vocalist & lyricist Hansi Kürsch. "Thanks to ‘Sacred Worlds" and ‘Wheel Of Time’ [from 2010’s 'At The Edge Of Time' album], I can say that we have learned a lot about scoring, recording, and mixing when it comes to such music. You will notice a great improvement when you listen to the final result of this adventurous trip we have started so long ago."

The result is a ridiculous raucous romp - technical dexterity married with lyrics that verge on the hilarious (take 'Ashes of Eternity': "Now, Raise the flag, The war seems over, And bow your head, at dawn they shall be murdered").

Songs such as 'The Throne' and 'Sacred Mind' have a presence and feel about then that, when listening very loud, or over headphones, transport from the mundane.

The very existence of Blind Guardian after so many years defies the mainstream mundane mendacity of a media obsessed with the latest fad: and to a certain extent the metal magazines that waffle around the latest trend.

From 1995 Blind Guardian have raised a single finger to convention; they are unfashionable, and for that very reason they are glorious.

'Beyond The Red Mirror' is proof that when you take the time and energy you can surpass expectations, raise the game and kick clichés into touch.

More orchestras, more choirs, more layers: Blind Guardian take all that, wrap it up in a self-conscious take on the genre they helped invent.