LET'S face it, there is one band that were the true founding fathers of heavy metal - Black Sabbath. From the first diminished fifth chord of the self-titled album and the self-titled song itself music would never be the same.

And now - with new album, '13', scheduled for release in June Sabbath have announced a European tour including a Belfast date on December 12th. Yes, you read that right - Black Sabbath will play in Belfast - at the Odyssey Arena.

Tickets (£55 + booking fee) go on sale this Friday coming, and with this being the only Irish date you can rest assured demand will be high. 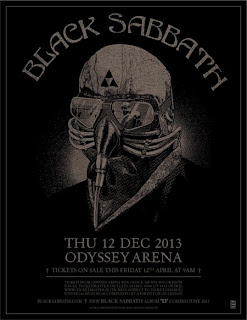 The triumvirate of Tony Iommi, Ozzy Osbourne and Geezer Butler are probably near as to being the perfect epitome of heavy metal. Unfortunately Bill Ward will not be joining them, but Sabbath are such an important band in the history of 20th Century music, this is a defining moment for heavy metal in the 21st Century.

Sure metal has evolved and Sabbath have been through personnel changes, but Sabbath are really something special in terms of the history of metal. And are still relevant today.

The new album has been produced by Rick Rubin, and with Iommi beating illness to record the tracks, seeing Black Sabbath on an arena tour is -and for once the hyperbole is justified - a once in a lifetime opportunity.

We here at Belfastmetalheadsreunited are probably as excited as we have ever been - junior editor (aka Zakk) has been muttering 'riffmeister general' since he heard and our graduate editor (aka Nadia) has just been telling everyone how good they were at Download last year.

War Pigs, NIB, Electric Funeral, Paranoid, Lord of This World, Sabbath Bloody Sabbath, Fairies Wear Boots, Snowblind etc etc etc - these were the songs that carved heavy metal, that etched it in folklore and placed it in music history.

This is heavy metal, this is Black Sabbath - see y'all there. And we'll say it one more time - Black Sabbath are playing in Belfast!
Posted by Jonny at 8:49 am