THERE is a school of professional thought that when reviewing gigs a journalist should stand cooly at the back of the venue, surveying the scene in a detached, aloof manner, with his pen poised to record pithy phrases and putdowns.

With more than 20 years experience of journalism both on news desks and reviewing music we must have misplaced that guidebook. Much better to sample the atmosphere at the front, pint in hand and horns hoisted aloft.

And last night (Monday 29th April) it was impossible to remain detached when bands as superb as SAHG and as awesome as Audrey Horne hit the Limelight stage.

SAHG opened the proceedings and not minding whether the audience was yet to build laid down a space rock, psychadelic, tourde-force - but to be honest we were won over when they managed to segue some of the twin solos and riffs from Thin Lizzy's Emerald to their opener. (They later denied that this was just for Irish dates, as they have included that for years.

With songs as strong as new single Slip Off the Edge of the Universe, Firechld and Godless SAHG are here to stay and we reckon a headlining tour may not be far around the corner.

However, the evening was let down slightly by the stand-in band The Mercy House. Grant us the mercy not to spend any time slagging off a band who genuinely seemed to put in so much effort, but they seemed to pulling in different directions, with guitarists and bassist headbanging away while the singer was doing his best to look like Sebastian Bach. 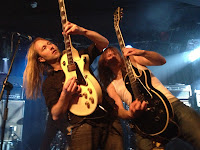 Those three words could sum up the show, but fail to convey the delivery, poise, confidence, and passion that the entire band laid down - it would simply be wrong to pick out any member as they all pounded the audience into adoring submission.

Opening up with Redemption Blues they rattled through huge parts of this year's album Youngblood, and with a few older tracks. The Cruel Sea and There Goes a LAdy were notable, but then again there was not a dropped phrase, a stupid interlude or daft posturing. This was a twin-guitar outfit, laying down hard rock they it was meant to be: surging vocals, guitar harmony solos and a rhythm section nailed down to the foundations of the Limelight2.

Audrey Horne are as tight an outfit and as good a set of international performers that have graced a Belfast stage in many a long while. They deserve to reach the heights!


Special mention for The Distortion Project for laying this night on - cheers as always Mr Loveday - and to Napalm Records for keeping faith with SAHG and Audrey Horne. And a huge thank you on behalf of the audience to all band members who took the time to chat after the gig.

You can see the band's own photo of the crowd on Facebook here.
Posted by Jonny at 1:16 pm