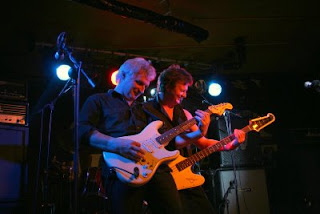 Sweet Savage hold a special place in metal history. They may not have been the biggest band in the New Wave of British Heavy Metal that burgeoned in the late 70s and early 80s. They may not have been the most influential. But they sure as hell earned their place in the pantheon of power through hard rock, craft and a welter of tunes that rocked...and they attracted the attention, patronage and friendship of one of the biggest bands in the planet.

When the Savage eagle landed at the Spring & Airbrake there was always a hint that after festival appearances an sharing a stage with Metallica there could be an anticlimax.

But from the first chords through until the house lights rose, Savage were an assured and confident presence; pounding out the sort of heavy melody that was the trademark of that era.

But this was not a heritage night, nor was it a night to revel in past glories.

From opener Ground Zero through to closing classic Killing Time and Eye of the Storm Sweet Savage retained an energy and presence many of the newer metal contenders would do well to try and emulate.

The well paced set captured the range the band has, and their obvious pleasure at simply performing.

From covering Budgie's classic Bread Fan (another 'Tallica fave!) through to playing with the riff of Purple's Women in Tokyo to introduce Dirty Money the entire band rarely took the foot off the pedal, with Speedo revelling in fretboard olympics, through to Raymie's facial contortions as he wrenched all available emotion out of the lyrics.

Though, perhaps most telling was when Trev, Raymie and Speedo lined up to Riff with Jules pounding out behind them. Smiling faces, whispered comments between themselves...this was a band clearly enjoying themselves as much as the audience.

Sweet Savage are back...and on Friday night they were home at last.

News of Raymie breaking the 'Metallica playing Belfast in 2009' story to come soon...

Special mention for World's End (who some of us, err, older metalheads may remember as Annex) who warmed up for Savage with a nicely balanced set.
Pix can be viewed at http://picasaweb.google.co.uk/BelfastMetal/SweetSavage3rdOctober#
Posted by Jonny at 1:51 am