To kick off 2016 with a bang, the Perugia, Italy-based group have just released the first single from the record entitled 'The Fool'.

You can obtain ‘The Fool’ via digital download HERE.
Listen to the track here.

Fleshgod Apocalypse said about the song: "'The Fool' is one of the craziest songs off the album, and we felt like it was the perfect way to let people approach our new work. It’s a song without compromises - and because of the character it is about, we had the chance to get into a profound matter that concerns us all." 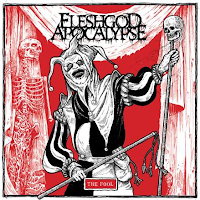 King’ was tracked at Kick Recording and 16th Cellar studios in Rome - and was mixed and mastered by world-renowned producer Jens Bogren (Amon Amarth, At The Gates, Arch Enemy) at Fascination Street Studios, Sweden.

The band will be touring extensively in support of their upcoming album with UK dates including an appearance at Hammerfest.
Posted by Jonny at 10:04 am