ALBUM REVIEW: Melodic rock from Scandanavia in the shape of Nordic Union

SO a new year begins and already it's continuing in the rich vein of quality melodic rock releases that was a feature of 2015.

The output from Scandinavian bands is simply staggering and the genre has found a real home in Northern Europe.

Purists of melodic rock and AOR will recognize the two players in the new collaboration known as Nordic Union. Ronnie Atkins from the legendary Danish band Pretty Maids provides the vocals alongside Eclipse and W.E.T. guitarist Erik Martensson,two respected and renowned figures in Nordic Melodic Rock. 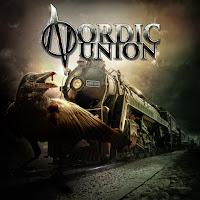 The album kicks off with some soft acoustic guitar on 'The War Has Begun' before Martensson crashes in with some slamming riffs,there's a bit of 'Holy Diver' bass in the background which keeps the song sludgy and earthy. The vocals are outstanding - great big chorus with some delicious hooks and Martensson totally nails his lead breaks.

'Hypocrisy' could actually be a modern day version of 'Livin' On A Prayer', a great pop-tastic song that thankfully registers very low on the cheeseometer,the crushing drum sound no doubt helps but yet again the guitar licks are impeccable.

The album has a great balance between the softer moments like 'Every Heartbeat' and 'True Love Awaits You' which echo classic Hysteria era Def Leppard (Atkins showing yet again that he hasn't lost any of his depth or range) and bangers like '21 Guns' (complete with it's machine gun style drum intro), 'The Other Side' and 'Go', which especially gets the head bobbing.

One of the many highlights on the album is 'When Death Is Calling',a foot stomping backbeat over some of the best melodic rock you might hear this year. Nordic Union are clearly having a blast on the album and this track typifies that. It's big,ballsy and leaves a lasting impression,which is exactly what good music is supposed to do.

This is a great album,a fantastic way to kick off 2016 and with fellow Scandinavian's H.E.A.T providing one of the most memorable sets at Download 2015 here's hoping that Nordic Union can find a gap in their hectic schedules and get over here for some live shows soon.

Nordic Union is released through Frontiers Records on January 29th and can be pre-ordered here www.frontiers.it

Review By Dave Stott
THIS REVIEW FIRST APPEARED ON OUR SISTER SITE DEVILS GATE MEDIA - CHECK IT OUT: www.devilsgatemedia.com