ALBUM REVIEW: Lynch Mob stand proud on the latest release from a rebel with a Cause...

GEORGE Lynch must be the busiest man in rock at the minute. Less than a year after the last Lynch Mob album, Sun Red Sun, and following on the back of the excellent collaboration with Michael Sweet comes 'The Rebel'.
The quick turnaround may suggest quantity rather than quality but that's not an accusation that can be levelled at this album. Back in Tandem with singer Oni Logan and with old mate Jeff Pilson on bass and Brian Tichy on the skins (is there any album he doesn't drum on?), this promised much. Chris 'The Wizard' Collier handling the production only served to enforce that and boy does it deliver.
As per the press release, Logan expands his lyrical scope beyond matters of the heart and mind to include his views on social and economic injustice on songs like 'Dirty Money', 'Kingdom of Slaves' and 'Sanctuary'

'Sanctuary' in particular is a fine example of this. A commentary on Modern day USA's shift from its original principles on which the country was built on to a more right wing agenda. No longer a refuge from pursuit, persecution or other danger. More a case of just what has gone wrong? 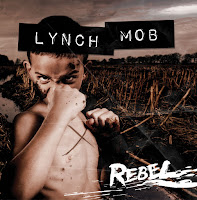 The album opens in good fashion with the groove laden 'Automatic Fix'. A mid tempo rocker about the love of music and how it can move you and is followed by 'Between the truth and Lies', a song about catching a cheating lover and not being bothered as the truth, is indeed, found in the lies.


Next up is the spiritual 'Testify'. A song which has a  strong Southern Rock Groove with a touch of Gospel thrown in.  Standout song so far with a slow, heavy beat to it and great vocals. Amen Oni!!
Next up is the aforementioned Sanctuary before the mood is lightened by the next two tracks, 'Pine Tree Avenue' and 'Jelly Roll'.
'Pine Tree' sees Logan reminiscing about his youth whereas Jelly Roll (according to the Urban dictionary) is about, err, sex!
Both songs are good fun before the mood gets serious again with 'Dirty Money'
This is a swipe at rich bankers and how they can gamble with people's money yet get protected by the system.


'Hollow Queen' darkens the mood with its slightly psychodelic stoner rock riff to open with and then develops into a haunting song inspired by Logans vocal delivery.
'The Ledge' is next. A ballad of sorts but with more dark subject matter than usual. A study of self sacrifice, it's very well written.
The album finishes with two more songs with serious intent in 'Kingdom of Slaves' and 'War'
Kingdom is another social commentary on modern day America and War is fairly self-explanatory.


What stands out on this album is Logan's growing songwriting ability and as usual Lynch's outstanding guitar work. Melodic at worst, damn well mesmeric at best, the riffs and overall composition are excellent.
For guitar solo freaks check out 'Automatic Fix' with its extended solo as well as 'Testify', 'Sanctuary', 'Pine tree Avenue' and 'Kingdom of Slaves'. No such thing as a bad George Lynch lead break but these, based on personal preference, these stand out.
Overall an excellent hard rock album that deserves your attention.


Review by Andy Gillen
Posted by Jonny at 11:04 pm