WITH 13 years of existence under their belts Kataklysm continue to cast a jaundiced eye on humanity's sad delusions, with their 12th album, 'of Ghosts and Gods'.

Their track record is indisputable - with nary a bad release and always maintaining musical and lyrical integrity.

That integrity means the Canuck four-piece can be relied upon to deliver extreme metal at its finest, defying conventions and producing, on this release, an outstanding 10 tracks that sneer and snarl. 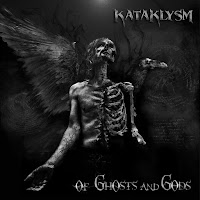 Maurizio Iacono's vocals come across as bile-filled as he rails and rants at the state of the populace of this planet. But it would all come to naught if the musical tapestry was vacuous. Instead JF Degenais's guitar crunches in a succession of riffs that roll like thunder and trundle along like an unstoppable tsunami - tracks like 'Shattered' and 'Carrying Crosses' have serious intent from the axeman.

The drums of Oli Beaudoin and bass of Stephane Barbe are a revelatory rhythm rock, perhaps the best on record that Kataklysm have produced to date.

The interchange between Oli, Stephane and JF on album closer 'The World Is A Dying Insect' is well thought out and delivered, enabling Maurizio to deliver lines such as "paradise for parasites" with justifiable cause.

Religion, cults, believers and ministers all come under lyrical assault; perhaps the mantle once held by punk as the sceptical voice amidst conservative conformity has now been taken by extreme metal and hardcore. Certainly, on the evidence here Kataklysm have the musical muscle and lyrical intelligence to be one of then finest voices of the disenfranchised.