FROM the moment Matt Fitzsimons challenges us all to "guess who is back, with a six-string round his neck" you know that a new force in hard rock has arrived with a bellow and set of 10 epic songs - yes, Gasoline Outlaws are here, big, bad and bursting with huge tunes.

An eight-legged rock machine that has been already earning justly deserved plaudits from their live shows, the release of 'No Rules, No Laws, No Regrets' sees them translate the energy and exuberance from the stage on to an album that showcases all their talents.

From the impassioned 'Stand as One' rallying cry not to slip into the mistakes of the past to the swamp rock sleaze of  'Come On' demonstrates that this is a band can slip easily into all the delightful hard rock atmospherics.

Matt's voice oozes charm and menace in equal measure, whether it be on the poignant 'Someday' or the angry rant on 'Lie'. Lyrically precise in structure and sentiment - this is a formula that many rock alchemists strive for, but few achieve as well as the Outlaws. 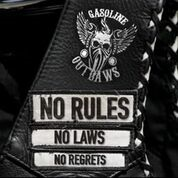 With Chris Fitzsimon's bass battering down rhythms and Adam Callaghan's drums solidity it allows Adam Parkin's sterling axe work to shine and act as the counterpoint to Matt's vocal rages.

'Outlaws' is a statement of intent, with a relentless riff as the song is propelled to higher and higher plains of power - Matt declares there are: "No rules, no laws, no regrets" but it is the structure of the song that takes the best of rock over the last three decades and wraps them up in a glorious bundle of badass music.

However, it is the glorious 'Heart & Soul' that comes as the rallying call for all rockers across the globe. An infectious chorus that is memorable from the first time you hear it is the manifesto for the Outlaws - how heavy rock "nothing to lose" and "nothing to prove" when you have "heart and soul" is the summation of what rock is about; it's transformative powers and its ability to elevate us above the zombie-like populace we share the globe with.

As Chris's bass chugs along with Adam's drums the other Adam leads down a merry road with a tight well-measured solo. Indeed, the solos and riffs across the release are all measured in the sense that they have to have some measure of discipline or the excellence would be lost in the maelstrom of talent that the Gasoline Outlaws produce.

What the band has managed to achieve in a few short months is nothing short of remarkable. Sure they are all experienced musicians, but to write 10 superb tracks, road test them on stage and lay them down on an album is something deserving of praise and accolades.

Aided by a superb production and mix from Frankie McClay at Einstein studios 'No Rules, No Laws, No Regrets' is an album that all fans of proper rock should be pre-ordering, and getting ready to have it lash their lugholes with on repeated plays.

Gasoline Outlaws release No Rules, No Laws, No Regrets on June 22nd.
Pre-orders are available here.
The album launch is in Ahoghill Rock City at the Diamond Rock Club on June 20th, with support coming from Conjuring Fate.

Review by Jonny
Posted by Jonny at 3:24 pm