ALBUM REVIEW: Armored Saint slay as they Win Hands Down

WHERE did that come from? Where did Armored Saint conjure up a beast of a record? Where did the inspiration come from for 'Win Hands Down'?

Whatever the source of this alchemy they should bottle it and sell it to every band who struggle in the studio.

With monsters like 'That Was Then, Way Back Then' and 'Muscle Memory' Bush and Vera have combined the base elements of music and lyrics into a golden example of metal. Hell, they even roped in Scott Ian's missus to contribute on one of the tracks!

This is Armored Saint's seventh outing and not only equals anything else but exceeds it in depth and breadth, without losing that essential quality that came close to them to breaking on to the high ground occupied by the 'Big Four'. 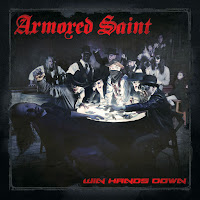 Bush spoke about what led to the album's origins: "When we started work on this record, I said, 'Let's pretend we are a really big band and can do whatever we want'."

"Technology allows us that luxury, and we can take that luxury when it comes to writing. In the end, we know who we are, so we don't have those boundaries that other bands might have - you push yourself, dig deep and write stuff that makes you feel happy and fulfills you. That's really important, and I think it came through. This means a lot more to us than just, 'We made a rock/metal album...'"

That attitude is evident on the likes of 'In An Instant', which is a reflection of the fragility of life inspired by the Boston Marathon bombings. And, we're putting pen to paper at a time when the surviving bomber is appealing against death by lethal injection...

But, while Bush's lyrics have a serious bent on several of the tracks, he's not afraid to lighten up against the background of Vera's arrangements.

"There's a lighter side to some of the lyrics, like 'Up Yours,' but I'm not afraid to strip myself emotionally and lyrically and divulge my feelings," said Bush. "To be honest, a lot of what I write is reminding myself how to live - 'If you want to live like this, put it in a song...' I strive to be a better person and father, and a good human - this is a reminder.

"I'm not trying to be [Bob] Dylan, I don't have that much foresight, but - especially being a little older - you can identify things. I try and write things people can relate to, but I'm also writing about things that have an impact on me. It's the platform I have, and it's nice when people are able to relate."

While much of the focus is on Vera and Bush as the principal writers, the unit is tight throughout, with Vera and Gonzo (drums) providing an awesome rhythm section, while Jeff and Phil lay down a  tapestry of tight guitars.

On the note of experimentation this also has Pearl Aday on 'With a Full Head of Steam' and 'Dive' a more laid back track, which has piano as the backbone to the track.

In lesser hands these things could have been fool's follies, but somehow they work in what is a well rounded album. There is a classic metal and thrash fusion throughout 'Win Hands Down' that simply works.

What could have been another band trying to reclaim past glories is instead a triumphant expansion on the Armored Saint template that takes them to another level.

Thanks for sharing this. More power!