EXTREME music, in its purest form can be a cathartic experience, a damn good excuse to step outside the fucked up, mundane life that shrouds our lives in the servitude of being a wage slave, scanning the latest war and horror news from around the world.

Death metal holds a unique place in extreme music, its dense, lyrical interweaving of the grotesque with at times inaudible, guttural singing and intense playing lay it bare to all sorts of charges and metal snobbery.

But like a bad penny it keeps turning up; and like a predatory animal seeks out your weakest point and hammers you into weeping submission.

However, for those with a penchant for the genre it is a glorious way to reflect on the dystopian society that we are forced to live within, monitored by cameras, tracked by our online movements and ostracized for our (lack of) fashionable dress sense.

When you sit down to listen to a slab of death metal it is an escape, a humourous, yet brutal experience with purveyors of gore and glorious noise.

Northern Ireland's very own Putrefy have been delivering their brand of blackened death metal for 20 years now, and shortly their latest album will be available to an unsuspecting public.

'Knelt Before the Sarcophagus of Humanity' is a seriously sick assault on the auditory canals of the populace. It should be prescribed by doctors as it can cure all manner of ills, from depression through to diseases of the dick...if it doesn't on first listen we reckon repeated plays will, and it will soon be approved by the medical authorities as a way combat extremist thoughts, compulsive viewing of bad TV and listening to shitty boy bands.

With tracks like the opener 'Wading Through Human Blood' and 'Awakening of the Stillbord' you know that religious fundamentalists will flee from this album, when they should be embracing its gore as a cure for their affliction. 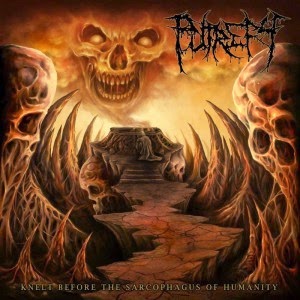 Musically the album is a bit of a return to the bands roots. That is not to say that some of the more recent death metal influences have been cast aside: instead the focus seems to have been on keeping it tight and intensity.
You could not accuse guitarists Conor and Aaron of not keeping it intense and locked down. There is barely a gnat's pubs between them as they lead from the front with a cascade of riffs, and frequent dischordantly beautiful solos. When melody rears its head it is pummeled down to emphasise the sheer weight of each track.

At the bottom end Jason's drums are more subtle than many DM acts: blast beats are not abused, but inserted when needed, and the snare is hit in an almost punk-like assault on a mod. At times, however, the cymbals don't have the necessary separation to hear whether it is a crash or ride bein played. No doubt something that will not be a problem live.

Bass on this release was played by Connor before Ross was brought into the band. It works well as a support for the riffs and drumming.

It is Connor's vocals that add more menace to an already threatening release. Inaudible because of a register that is at the ultra low frequency used by whales and US submarines to communicate with. The US fleet will be baffled when this is played live, while the whales will just chill out. Is it a coincidence that there are now more whale sightings around our shores recently?

That is not to say that the vocals are monochromatic guttural roaring. There is enough variety to keep the songs interesting.

From operatic openings to the 2013 recording of 'Pig Fucker' this album is a treat of death metal that shows why Putrefy have graced staged from the US to the Czech Republic.

Okay - there's nothing that original on 'Knelt Before the Sarcophagus of Humanity' but what is there is a prescient reminder that death metal delivered well can be redemptory experience, forcing you to actually listen to the output rather than let it wash over you.

You'll not hum along to these tracks, but by all the bloody corpses of the ill-advised wars you will find death metal played with suitable care, attention, intensity and lyrical sickness.

We're off to try to hum along to 'Smashed Down With Iron'...

Review by Jonny
'Knelt Before the Sarcophagus of Humanity' is out this month on Sevared Records
Posted by Jonny at 3:57 pm

Email ThisBlogThis!Share to TwitterShare to FacebookShare to Pinterest
Labels: death metal, Knelt Before the Sarcophagus of Humanity, Putrefy, Sevared Records