TOBY Jepson - the man behind Little Angels, voice of Gun for a time, and producer par excellence of The Answer's latest album New Horizon - has produced something of an acoustic masterpiece ahead of his winter solo tour, which sees him play The Diamond Rock Club on January 11th.

This six-track release is an absolute in-your-face demonstration of how the man can fill the space which too often is left with aural gaps on acoustic productions.

It is also a demonstration of a lyricist who has evolved, a lyricist who can tackle live issues, awkward discussions with a sensitive touch and a challenge to the mainstream.

Opener, and title track, Raising My Own Hell, sets the tone, with a dynamic mix and a clear statement of intent. 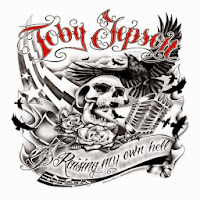 The most rounded and deeply impressive tracks are Patience of a Saint and Shoes. In the former a well-structured arrangement allows the vocals freedom to roam through a skeptics challenge to 'faith' and theism. While it is unusual to see a rock vocalist take on a topic such as this, it is handled with aplomb.

Shoes is a delicate yet up front take on the situation that anyone can find themselves in during these times of austerity. Painting in words a beggar who is a former soldier left scarred by the "brutal touch" of war is a notable point in a poignant ode.

Album closer 'Shadow Boxing' is a slightly off-beat take on Jepson's soundscape, with sax and a tangential at times arrangement throwing the listener briefly off step before they can appreciate the real groove and swing in the song. Available from Jepson's site as a free download, give yourself an aural treat before you buy this album.

The contrasts in this album are also highlighted in this song - while at times confrontational, it is also tender in just the right quantities.

Out now on Townsend Records it's six-tracks should be in every rock fans collection.