Terrific trio with a dark side

ALKALINE Trio are one of the few 'pop punk' bands that have a certain resonance with the metal community; if not for the music but certainly for the lyrics. Matt Skiba even had an inverted cross shining silvery bright against his black clothing.

When they came to Belfast on Tuesday night (August 27th) the almost capacity crowd at Limelight1 the audience was a cross-section of music fans; old school punks, pop punk fans, indie kids, metalheads and those who just wanted a chance to see Alkaline. 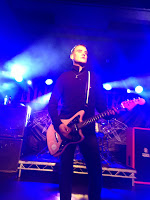 Opening up for the Illinois headliners were Belfast band Empty Lungs, who provided a chirpy pop punk intro, with edges of Belfast steel, as the hall gradually filled up.

As with all good bands, Alkaline Trio know how to build up a certain sense of drama - right down to the guitar tech borrowing a lighter from the front row of the audience to ignite six red tea light candles atop the amps.

Opening up with Private Eye was an obvious crowd pleasing choice, but it was to be the only 'obvious' hit that the band were to play; Stupid Kid and Mercy Me were left out in a sure sign this was a fans only set.

Despite the early stage time (as a result of other events in the complex) Skiba, Andriano and Grant were obviously not here for a run through, and having earlier delivered an acoustic set in the city centre record store Head Records they were not blunted in any way.

Skiba had an air of aloofness for the first few songs allowing Grant to open up the banter with the audience. Whether it was waiting for the crowd to warm up or an attempt to assess the interaction that aloof manner soon dissipated and by the time I'm Only Here To Disappoint was played he was crossing himself - inverted of course. 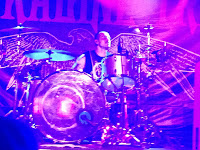 Sadie G and Warbrain were among the many highlights; with Skiba introducing Warbrain by saying the band used to claim they were from Toronto when touring Europe during the Bush presidential tenure.

The obligatory downing of a pint of Guinness was removed slightly from the cliché as Skiba and Andriano bantered about why the bassist had a pint and Skiba had not; the guitar tech then scurrying hurriedly for a fresh pint of the black stuff before the band ploughed on through the rest of the set.

Closers This Could Be Love and Radio, were an appropriate way to end this pop punk extravaganza. For a band that have in the past been judged radio friendly, they have carved out their own way to transmit their dark tales of love and death.
Posted by Jonny at 1:26 pm