This is an onslaught on your aural senses delivered by thrash heroes Onslaught, who on this album prove that you don't need to teach an old dog new tracks when they do what they do so well. No faux posing, no 'epic' songs through a false need to 'prove' oneself.

On this album - entitled VI - Onslaught are an elemental force. Onslaught have not changed with this album; they have instead gotten better. 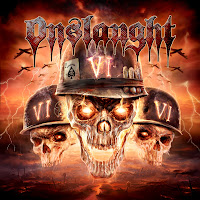 They have taken the thrash template and sharpened it to a stake through mediocrity. Sy Keeler remains a front man who delivers as if his life depended upon it; Nige Rockett and Andy Rosser-Davies guitar retains the tone you'd expect from Onslaught's guitar attack, but seem infused by a spirit of Onslaught's past and a vision of a future as thrash geniuses.

From opener Chaos is King to closer Enemy of My Enemy this is unrelenting. And it has as Nige Rockett a series of contemporary themes in the lyrical diatribes.

“Children Of The Sand” is Onslaught’s biggest experiment to date without question," he explains "Lyrically it reflects the fragile situation in the Middle East, which is inherently caused by religion and the indoctrination it breeds.

"The music paints a very dark, eastern sounding backdrop for the lyrics and we’ve actually incorporated a 'real string section' and 'female vocals’ to enhance the whole theme!” 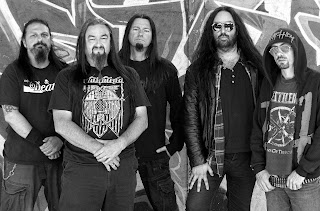 It is one of the album's stand-out tracks, sitting comfortably beside the straightforward heads-down Dead Man Walking and the immense 66'fucking'6 and Cruci-Fiction.

Amidst all the lyrical themes Onslaught paint a dystopian vision of a world falling apart; and the pound from Jeff Williams bass and new sticksman Mic Hourihan drive it forward.

In many ways this does harken back to the first incarnation of Onslaught which began in the heady days of the 80s, but in other ways it refreshes the sound, refine it and enhance the brutality of 2011's Sounds of Violence.

Even the cover art by Par Oloffson reinforces the vibe.

Overall Onlaught have delivered. On VI they have delivered a thrash masterpiece, earned the hard way through years of experience and a willingness to keep believing in their art; and it is an art of destructive, titanic thrash metal.

VI is released on AFM Records in the UK on September 23rd.