JAZZ and metal are not words you ever expect to see in the same sentence, let alone in the same musicscape. But Norway's Shining are, if not pioneers, the only band that have set out this as a vision.

Following on from the album's Blackjazz and Live Blackjazz Shining have released One One One, a bleak post-industrial metal jazz aesthetically intense album.

Air guitar is one thing, air drums and air bass are just about plausible but air saxophone playing may stretch plausibility a wee bit too far...

However, there is something strangely engaging about the album One One One. It is entirely understandable that one should not like it, but it has a weird groove that it is likeable. We don't even care that the fashionistas have declared a liking for it - they'll soon forget the metal that lies within...

The influence of Sean Beaven, whose previous production credits include Nine Inch Nails and Marilyn Manson ks clear and at times it sounds like Manson on meth and Nine Inch Nails in a rare moment when of clarity.

A cynic might see the jazz metal monicker as a gimmick to hook the unwary, but within the bleak, industrial, landscape it all fits together perfectly. 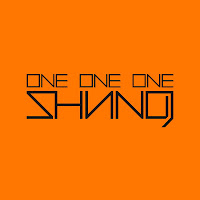 Album opener, I Won't Forget - already a massive hit single in Norway - is a hint at the accessibility within the density.

Equally accessible is My Dying Drive and Off The Hook, for people who already have a penchant for industrial metal. Blackjazz Rebels is where the album really kicks off, ramping the dischordant keyboards, pained vocal approach and buzzsaw guitars to produce a track that would sit well in a German metal rave club...

The Saxophone solo opening of How Your Story Ends can be a little off-putting with its avant garde take on free form jazz.

But that is to take nothing away from Jorgen Monkeby's vision for this album.

“When writing the songs for One One One, I aimed at getting each and every song to sound their
absolute best, and to be strong enough to stand alone. A series of ones, which is also where the
album title comes from”, said Munkeby.

“But as a huge fan of the longer forms ofmusic, where the whole album or symphony is just as important as the bits it is made from, we never strayed away from focusing on the totality of the album. I really feel we’ve managed to successfully combine these two aspects.”

We certainly enjoyed taking a dip into Monkeby's weird world, despite the obviously derivative nature of some of the tracks.

This will appeal to industrial metal fans, and for those who imagine what Dream Theatre would sound like as jazz and Nine Inch Nails fans then this could be for you! Seven out of ten.
Posted by Jonny at 1:18 pm