Amon Amarth - Nine not out blast their best to date

WHEN it comes to determination many a band have faltered when their dreams of pursuing a full-time career seemed but distant promises - almost like a trickster had promised glory only to steal it away./

A few years back Amon Amarth willingly conceded that when it came to their career they had to take the plunge and gamble with going full-time all the way. Several albums later it could be that the prospect of  being in the endless routine of recording, touring, recording and then more touring that the dream was more of a chore.

Which on this, their ninth album, they show that when you really love what you're doing, and believe in it then you can live the dream and still produce something with real energy. Deceiver of the Gods is perhaps their best ever recording, brimming with energy and bursting with fury.

The production of Andy Sneap lends an immediacy to the recording, and they have mixed it up with old school metal, thrash, their trademark melodic death metal and even a bit of doom.

As usual Johan Hegg brings Norse Mythology into every song, but equally this is a man versed in the subtleties of Swedish history (read his Metal Hammer opinion piece last year) as much as the mythology has many more layers than a comic book/movie interpretation. The focus this time is on Loke (the titular Deceiver of the Gods).

Hegg explains it is the Janus like nature of Loke is a reminder of our fallibility.

"I just think he is really engaging in that he possesses a lot of human traits in the sense that we can do good and bad," he said. "We can be fantastic people and great people and huge people and we can be very, very small people.

"We can be small minded and egocentric and devious and all of those negative things, and I like how he reflects that."

Musically, however, there is no ambiguity on Deceiver of the Gods. This is an in-your-face performance from a band confident in their success and ready for the next level. 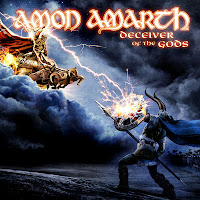 From opener - and title track - this is a tour de force. The great tracks keep on coming. The previously mentioned thrash elements are there in Under Seige, Father of the Wolf and Blood Eagle, while Hel - aided by Candlemass' vocalist Messiah Marcolin - shows a more considered approach, slowed down from the headlong rush into a track with many divergent element. Marcolin's harmonies coupled with Hegg's growl, insistent riffing and an almost orchestral arrangement it is a song that completes the album's worth.

Album closer Warriors of the North takes Amon Amarth to the next level. It is an eight-minute plus epic that takes the mystery of the Northmen, their courage and their tragedy and encapsulates into a musical tale deserving the utmost respect in terms of songwriting.

Overall Deceiver of The Gods is what Amon Amarth have aspired to throughout their 21 years of existence - an album that truly captures their live performances.

Sneap's production and the decision to track their instruments live in the studio have lent a groove to the insistent riffing and melodic twin guitar assault.

"It's rougher, and like a punch in the face,which us what we wanted it to be," he said. "Though adding more thrash elements into a few songs helps the whole album sound more hostile, it's ultimately the production that makes them sound more aggressive.

"On the last few albums it didn't matter how aggressive the riffs we wrote were, whenever we went into the studio at the end they just didn't sound as intense."

Olavi - PR blurb aside - we agree that this time they are even more intense.