"Beginnings and endings are contingent things...devices. Where does any story really begin? There is always context, always an encompassing greater epic, always something before the described events..."

With any review it is a description of events as they occur at that moment, whether it be a gig or about an album - a snapshot of what the recording process resulted in. A review is describing those events, not what went before, unless absolutely necessary...

For those of you familiar with the history of Stormzone, its members and its growth to date there is no need for context. For those who are not, the only 'context' you need before taking on board the 'encompassing greater epic' is to know how the 'described events' on new album 'Three Kings' have translated on to a fine finished product.

Emerging on the back of the critically acclaimed Zero to Rage, it was always going to be a challenge to rise to the heights of that release. But, on 'Three Kings' the band pledged to take a step up. 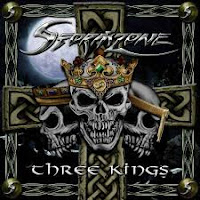 That step up has produced a better rounded album, packed with variety, but rooted in the history of classic heavy metal, European power metal and the heritage of Northern Ireland hard rock and metal.

Opening with Churchill's address to Parliament on 13th May, 1940, promising nothing but "blood, toil, tears and sweat", this prelude announces'The Pain Inside' - a statement of intent; a promise that all the members have committed to move the band to the next level, without sacrificing anything at the altar of compromise.

'Three Kings' has all the elements you would expect of a well-rounded classic metal platter.

Soaring vocals from Harv at the right moment, carefully crafted solo passages from Steve Moore and Davy Shields all anchored from Graham McNulty (bass) and Davey Bates (drums) as a cohesive rhythm section.

There are also slices of subtlety (the intro to 'Never Trust' and the ballad 'Beware In Time') amidst the classic riffs. To say they are classic riffs is in no way meant to reduce the impact of their construction. True, at times there is more than a nod to metal's NWOBHM predecessors, and once or twice a nod to Maiden's "chugga-chugga" pacing appears, but it is simply doffing a hat rather than stealing said headwear.

Evidence of how to properly pay homage to the past is on the 'The Pass Loning'. Here the influence of Irish rock is apparent with its Lizzy references and even a hint of Horslips. Rightly, this is about knowing where you come from and absorbing that as you construct your original interpretation around it. As Mr Banks would have put it, it's all about "context".

There are some weaknesses, however. One cannot help cringe a little to the over-the-top lyrics to 'BYH'. The song has tremendous harmonies and solos, but surely we do not need to the call to 'bang our heads'. A bit too clichéd, it may play better in Europe, but surely set to be a live favourite.

Nonetheless this is perhaps the only failing on Three Kings, redeemed by the closing track's lyrics as Harv treads the familiar path of classic metal in a call for common sense on 'Out of Eden'.

Well rounded, well executed, and well presented as an album this does represent a solid step up for Stormzone, taking 'Three Kings' as a singular release or as part of the growing emergence of the band as a force worthy of wider shores.

Deserving a 9.5 out of 10, this is Stormzone growing to take their next step on the all-encompassing epic that is the tales of glory told in metal.
Posted by Jonny at 9:35 am