Get a reality check - please take a chill pill!

OKAY here's a wee step outside the norm for this blog - a serious rant. I have noticed of late a serious and committed attempt to big up the Northern Ireland rock and metal scene. And it is getting ever more healthy if you haven't noticed. With the Diamond Rock Club, the Distortion Project, Ma Nelson gigs and various other things going on, it's healthy.

But there are some people that slag off those trying to get the shit organised. The simple equation is that if you want in, fair enough, if not, also fair enough. The promoters, the bands, the venues are all pretty much in it together. But the point to make here is not that what they are all doing is not worthy - rather they are doing it out of love of the music.

While you are raging at some perceived injustice about people doing what they love please, please take a step back. They're not harming anyone, and through efforts such as charity fundraisers are doing a lot of good.

Local bands need outlets for everything from album launches through to just being seen; that they are prepared to do some good is even more laudable.

I want anyone who thinks about slagging off anyone else to take a look at the two photographs below. Just for a moment think about your priorities. 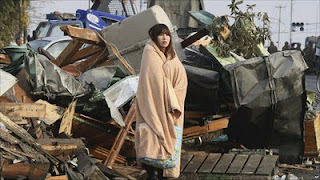 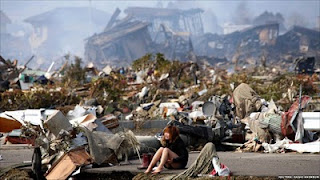 I've lifted them from the BBC website and apologies to the Beeb, but there is an important point I am making.

We all need a sense of perspective now and again. These images have haunted my dreams more than anything else in recent years.

Right now there are hundreds of ways that you can help: head to a charity gig, take part in some of the work Iron Maiden have done, or even just log on to the Red Cross appeal.

But most of all, next time you think about having a pop at somebody else, realise what you are doing, and have a pop at something in the real world. If we are here talking about heavy metal and hard rock, it's not going to change governments or spread democracy in oppressed lands. It's just a music form; a very important music form to all of us who listen, but not the most important thing.

As I look at the images above I sort of wonder about the heavy metal bands from Japan like Vow Wow, Loudness and Anthem. I haven't looked at their sites because of the enormity of the earthquake and tsunami because I feel like a moral coward, sneaking a voyeuristic peek at a tragedy.

Right - I've ranted, and mixed several non-coherent themes, but I've got it off my chest. Normal service will now return. Thank you for reading and tolerating this crap!  Now everybody chill the fuck out!
Posted by Jonny at 11:46 pm