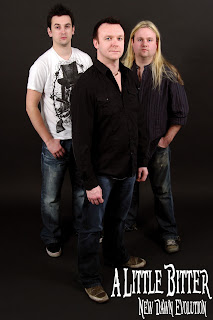 A Little Bitter are one of the rarest breeds in heavy metal and hard rock - that select few who acknowledge their influences, then use those self-same influences in an alchemy of delightful noise. Their second album, New Dawn Evolution has the trio building on their impressive début, 'The Blood' with a fury few can match, and hidden subtlely that is rewarded on repeated listens.

It is a ten-track tour de force of heavy eloquence. Opening with 'Battlesong', the listener is battered by a statement of intent from a band that has matured and come up with more fire in their bellies than a hundred wannabies. It closes with the plaintive acoustic 'Twist Her', putting anguish to an achingly haunting cry from the heart.

These two tracks sandwich a diverse set of songs that both blister ears and challenge perceptions as to how bands are supposed to sound in these days of pundits trying to shoehorn acts into pre-conceived genre labels.

Confounding the clichés New Dawn Evolution displays charm and wit, defly demonstrated in power riffage and the ability to use the music to display light and shade. That deftness of touch adds to the sheer weightiness of the tracks.

'Dark Tide' nods to the Celtic Rock heritage of Lizzy and Horslips, but in a progressive arrangement. 'Genghis' out hardcores the hardcore, but is even more intense for it's quieter moments. 'Healing' has rage in words and riffs. To list the features of each track would be to deny the purchaser the joy of discovery.

New Dawn Evolution is by equal turn bravura without the bluster; and literate without showiness.

Jonny's vocals are more dynamic this time. On one song he sounds like the most pissed off man on these islands; the next a man bearing more pain than any other. His solos are more considered this time out, with a definite nod to some 80s tone, but in a modern setting and arrangement.

The rhythm section of Seamy and Darren have an intensity and sheer heaviness, which coupled to the Neal Calderwood's pristine production lends an element that was needed to take A Little Bitter to the next level.

While début platter, The Blood, had an excess of good tunes, at times there seemed to be a sub-conscious desire to strive for accessibility on some tracks. New Dawn Evolution's songs do not have the immediacy of 'Angel' or 'Jebus' (from The Blood), but put the effort in and there is many more rewards this time out.

A first listen may have heads nodding and feet tapping. Listen again and you'll be taken by every track, 'Shake' will have you wondering about relationships that have been screwed up, while 'Twist Her' will have you thinking about every break up you've caused or been on the receiving end. (Kudos too for the lyrical nod to the aforementioned Angel.)

This is not a flawless album - there is no such thing. A very few times there is a sameness about one or two applications of the guitar tones. It is thankfully a very minor gripe. It is more than made up by the sheer musicianship on display, and the strength of each and every track.

Make no mistake about it - if you liked The Blood, you'll love this. If you haven't heard A Little Bitter before then there can only be one question: why the fuck not! Get yer asses in gear, head over to http://www.alittlebitter.co.uk/ and book your copy of New Dawn Revolution.

Email ThisBlogThis!Share to TwitterShare to FacebookShare to Pinterest
Labels: A Little Bitter, Battlesong, New Dawn Evolution, The Blood, Twist Her

I think they suck balls

then you fail at life so give up

very well written review, love the blood and cant wait 2 get my hands on the new album.