ALBUM REVIEW: Inglorious avoid the dreaded second album with a stormer on II

INGLORIOUS were formed a mere three years ago, in 2014, when Nathan James having had a spell as singer for The Trans-Siberian orchestra and Uli Jon Roth decided to look for like minded musicians to play old school Hard Rock from the era of early Whitesnake, Deep Purple to name a couple and produce music that paid homage to that era.

This brought about the critically acclaimed debut album in 2016 and a little over a year later, after increased popularity and festival spots such as Ramblin’ Man Fair, they are about to release the follow up “Inglorious II” on May 12th, but has the dreaded second album syndrome effected them?


With the band recording in an old fashioned way of being in the same room together with as James puts it “with no click tracks, auto tune or overdubs” just feeding off each other and with the vibe created the answer is a resounding no.
In fact “II” if anything is more polished, better written and showing the confidence of a band happy in their own skins and what they are trying to do.
The subdued opening to first track ‘I Don’t Need Your Loving’ is a bit of a con for the listener as it explodes into a riff laden fast tempo rocker with strong vocals, bass and drums that features the first of many nice solos by Andreas Eriksson. The slow fade out to the song is just a tease into the unashamed, in your face ‘Taking The Blame’. Another fast paced song full of classic riffs, dynamic vocals, rhythm section with another great solo. 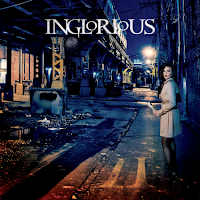 James’ love of all things Coverdale comes to the fore on ‘Tell me Why’. The influences, especially in the vocals, are evident but rather than be an imitation it’s more an acclamation to that era, bringing it back to life yet they manage to put their own stamp and sound on it.
‘Read All About It’ has a real groove to it with a big bass and drum sound from Parkinson and Beaver. It drips with energy and has that ‘live’ feel to it that the band wanted to create with a great overlaid lead and rhythm guitar section driving it on.
The slower paced, bluesy ‘Change is Coming’ eases the listener in before becoming a heavier sounding power ballad with simple but effective back up vocals. A nice alternating guitar line lifts it above your normal ballad.
‘Making Me Pay’ is another slower tempo song and again is reminiscent of the early Moody/Marsden era Whitesnake and could easily have been on any of their earlier albums. James also gives his vocal chords a bit of DC flexing near the end....good song.
In stark contrast ‘Hell or High Water’ has a darker start to it before James shows off his diversity with a dramatic vocal delivery. This is the heaviest track on the album that could fit in sound somewhere between Deep Purple and Iron Maiden in terms of the riffs and subtle tempo changes. It probably leans more towards Purple but there is definitely a bit of Maiden in there, especially in the bridge between the verses and chorus, at least to these old ears!
‘No Good For You’ starts with a staccato style riff and is another faced paced song but with an underlying melody throughout and more superb guitar runs.
Next up is ‘I Got a Feeling’ which is another bluesy track with a lot of groove and swagger to it with James’ soulful vocals and Eriksson’s solo being the highlights of the song.
‘Black Magic’ follows the same formula as before, slow intro combination of drum, bass, guitar and a bit of piano turns it into a song of varying change ups. It’s a real throw back to the 70’s style rock song, fade out included.
Penultimate song ‘Faraway’ slows things down: a ballad with a nice acoustic beginning and a lighter delivery from James to start which is full of emotion, before building into a full on electric old school classic rock song with the vocals becoming grittier and almost Dio-esque in nature.
The album finishes with ‘High Class Woman” and closes the album as it began with a rip snorter of a tune that focuses on the bands main selling points, James’ souring vocals, including a few Coverdale screams, and the riff attack of Eriksson with Wil Taylors rhythm guitar lending its weight to produce a song that will have you reaching for the replay button (or stylus if you’re on vinyl)
Overall this is an outstanding follow up album and shows that the acclaim the band receives is well deserved. While this release harkens back to the roots many of us enjoy it is still very much an album of 2017, and will stand the test of time. Let’s hope they continue to produce music of this quality in the studio and on stage for many years to come.
Review by Andy Gillen
The band –
Nathan James – vocals
Andreas Eriksson – lead guitars
Wil Taylor – guitars
Colin Parkinson – bass
Phil Beaver – drums.

The Kevin Shirley produced album will be released as a standard CD and also as a Deluxe CD/DVD edition. The DVD will feature a previously unavailable live performance from Download Festival 2016 plus extra bonus content, including videos for forthcoming singles “I Don’t Need Your Loving” and “Taking The Blame”. A vinyl release will also be made available through Frontiers Music Srl partners Soulfood.
Posted by Jonny at 7:33 am