IT seems that Overkill have been around forever, given that their roots first dug into the earth in 1980 as The Lubricunts in 1980. But 34 years later can they still remain relevant as the thrash movement evolves and moves on?

On White Devil Armory, the band's 17th release, it could be argued that they haven't really moved beyond the East Coast Thrash template, but that would be to ignore the maturation of the individuals.

That's not to say they've settled down to a life of sounding like a thrash version of Foreigner. The fury is still there - take the track 'PIG' for example - it has just become more focussed.

At the heart of the band are Bobby 'Blitz' Ellsworth (vocals) and D.D. Verni  (bass and backing vox). Both original members, and both seem to be determined to keep the Overkill template; even if at times Ellsworth is beginning to sound a little Teutonic in places. 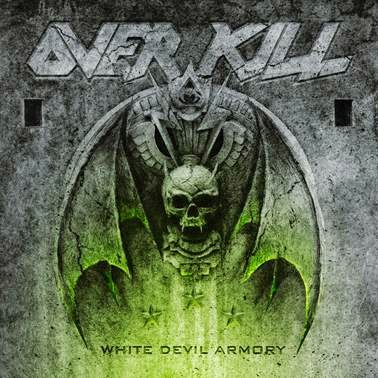 That's not to say that the rest of the band are not committed to the 'Kill. Lead axeman Dave Linsk, after all has been there for 15 years, rhythm man Derek Tailer for 12 years and drummer Ron Lipnicki for nine years.

Indeed this is one of the most stable line-ups of the band, and sounds a more coherent release than 2012's 'The Electric Age'. On 'Bitter Pill', for example they easily transform a chug-a-long riff to a breakdown that echoes Masters of Reality/Vol 4 era Sabbath before a tasty Linsk solo rounds the track off.

There are times when they do fall back on the thrash by numbers template, but these are few and far between. Even when they do such as on 'Down to the Bone', there is an honesty about the delivery that means one can forgive these elder statesmen that indulgence.

There are enough highlights throughout the album to keep even the critical voices still, such as when Verni's bass introduces the potent 'Freedom Rings' in all it's almost seven minutes of thrash glory; a track when even the chanted backing vocals do not grate but match the sense.

'King of the Rat Bastards' is another stand-out track, building with menace to a hellish vision of society torn apart.

The closer 'In The Name' perhaps sums up Overkill in 2014. Ellsworth straining to achieve maximum effect, intertwined guitar lines from Linsk and Tailer, while the clear production picks out Verni's bass lines and Lipnicki fires fills out. The breakdowns and the targets of the lyrics merge from pure fury to slowed down punctuation.

Yes, Overkill are still relevant in 2014. Yes, Overkill deserve their place in the  pantheon of thrash greats. Don't overlook Overkill. Join and get the head down.