FUCK Alestorm! They can fuck off right now. I fucking hate Alestorm for what they have done to me. The sun was barely over the fucking yardarm and their tales of piratical whimsy had me raising a bottle of rum to my lips with a beer chaser...

So I sit down now, hungover - yes thank you fucking very fucking much Alestorm for reducing this reviewer to a trembling wreck.

By the time I reached track two, and the lead-single 'Drink' I was drinking and there was no chance of going near the keyboard, let alone seeing the screen. 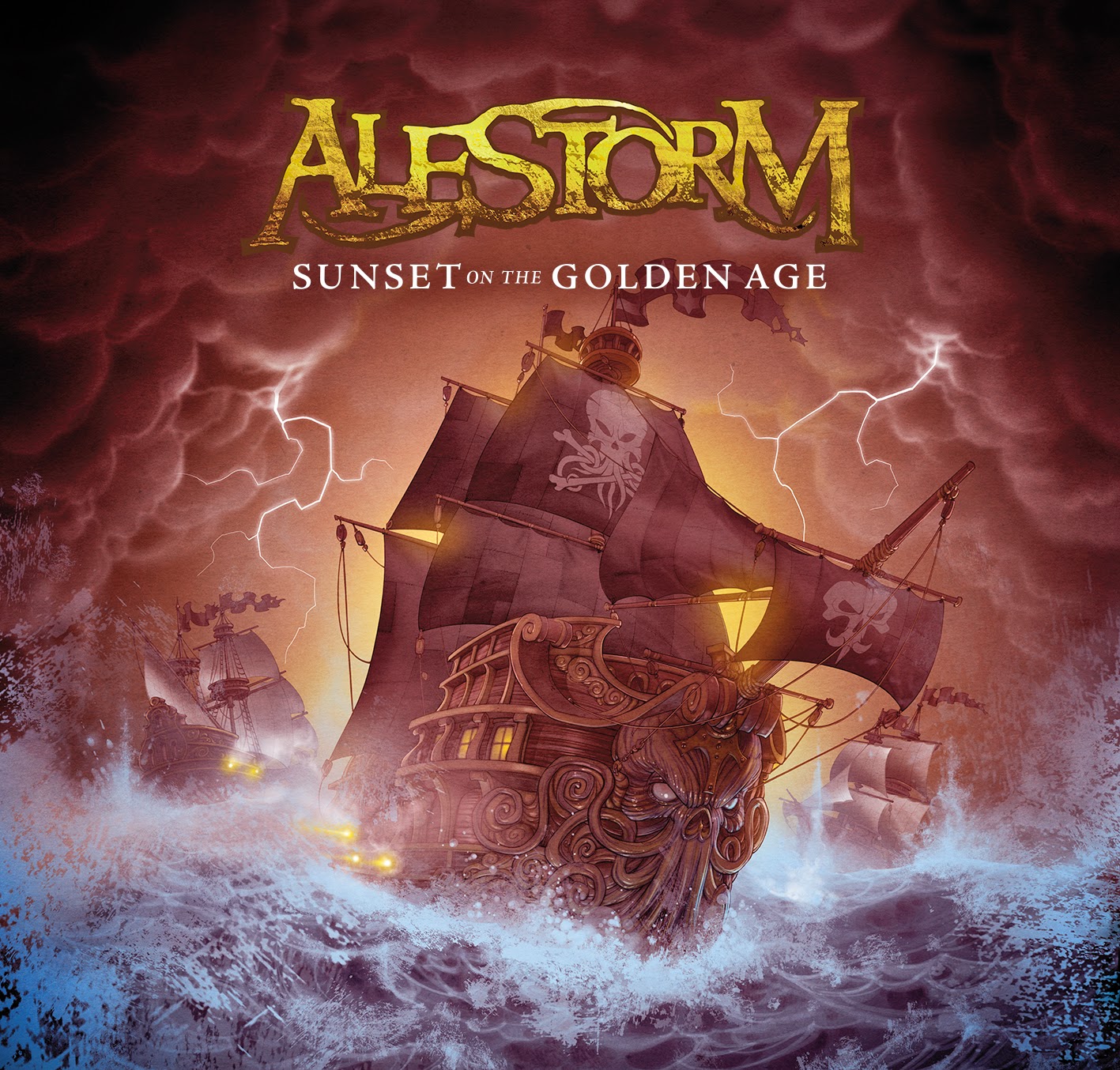 Stop now, pause for a second. Regular readers know we very rarely write in the first person as quite often a consensus is worked between one or two of the other contributors. I feared that they should only be exposed to this release in a safe environment, lest they go the same way as I.

Next. Your disbelief. You need to suspend that disbelief, put on an eyepatch and say 'Arrr' a lot. For Alestorm are an antidote to the straight faced, clenched arse reviewers and musical/metal snobs. In this era, in this world that is falling around itself, with power mongers, potentates of multi-trillion dollar empires that strangle the world as the rich get richer and the rest are lied to.

So, with a trusted person there to  watch out for any attempt by your liver to escape the onslaught of booze, don your headphones, suspend your disbelief, and prepare for your face to be adorned by a
huge shit-eating grin...

Sunset of the Golden Age is a superb album - "True Scottish Pirate Metal" as the band proclaim.

From the opener 'Walk the Plank' through to the closing, epic track, 'Sunset of the Golden Age' there are songs to quaff to, songs to sing along to, and a song about one of the most disastrous battles ever fought by the Royal Navy...

'Drink' has already been aired as a single and played at festival dates across Europe, with much approval from crowds, given both it's subject matter and an irresistible chorus.

You get a sense of the mystique Alestorm create, with the likes of  'Surf Squid Warfare' and 'Mead from Hell' counterpointed with the tale of doom and greed in the shape of 'Magnetic North' and '1741 The Battle of Cartagena'.

The latter commemorates the one of the most infamous episodes in the history of the Royal Navy, when a fleet sailed to Cartagena de Indias during the War of Jenkins Ear. An ambitious assault was planned against heavily defended Spanish colonies and trade routes, that resulted in around 10,000 British dead, 7,500 wounded and sick, six ships sunk, 17 ships of the line heavily damaged and 31 smaller vessels sunk.

Despite the 8-bit keyboard intro, it is a relatively accurate account.

Accurate also is the song 'Hangover', which according to people who know these type of things is a re-working of some pop/R&B song, with lyrics that seem to sum up the general attitude..."don't ever grow up".

Throughout the album the precise and measured drumming of Peter Alcorn features with bassist Gareth Murdock and Dani Evans on guitar providing a backdrop to Elliot Vernon's keyboards and Christopher Bowes over-stretch vocals and keytar noodling.

While Bowes adopts the usual faux pirate tone there is no-nonsense approach to his performance. For the full effect it has to be played with a straight face.

Album closer is one of the most ambitious song Alestorm have attempted to date. Almost 11 and a half minutes long it is a complex play on musical styles and suitably tempered as a closer.

Are Alestorm, as they claim, 'Bacon Powered True Pirate Metal'? Yes. Can the unwary listener be caught up in the chaos and end up with bottle in hand? Yes.

Will the Belfastmetalheadsrenited review crew be turning up when Piratefest lands in Belfast on October 17th with a raiding party at the Mandela Hall? Yes.

And, now to the real reason why I fucking hate Alestorm. They are fun, silly, musically talented and have a twist to the power/folk metal genre, and I always feel that I have to justify liking them when confronted by musos and the hyper-critical...

But no more! Just board Alestorm's vessel and enjoy!