THERE are times when you play a new record and your reaction is 'meh, it's all right, maybe I'll give it another spin'. Then you play it again. Then you get to like it. Third time you love it. Fourth time you are pummelled into a blissful state of metallic glory.

Such is the case with Devildriver's latest release, the quite awesome Winter Kills.

At first it is a chaotic cacophony that upon more listenes coalesces in a couple of spins to coherent metal anarchy. After the full-on charge of opener Oath of the Abyss, Ruthless grooves like a bastard; swinging with the menace of a heavyweight boxer on amphetamines and so the pace continues.

For an optimistic kind of guy Dez Fafara and his merry band of metal compadres have released an album that is full of fire and menace.

And it is a huge step up from last release 'Beast'. As Fafara himself explains:

"The title of the album is all about rebirth," he says about Winter Kills. "I love to see things grown from seed. I love to see the dying off and the rebirth - that's why [after Coal Chamber] I had no problems starting a second band."

And to a certain extent this album does represent a re-birth with touring bassist Chris Towning now full time. His influence appears to be in an understated desire to make sure the rythm section - complete with drummer John Boecklin - keeps things nailed down; for all the flourishes and dexterity their job is to keep the groove grooving.

Desperate Times is evidence of Devil Driver's acquisition of yet more carefully constructed arrangements, and the influence of Towning and Boecklin is clear

Winter Kills has trademark DD opening with an insistent riff paving the way for the full-on assault.

The Appetite is as in your face as it gets, but with a set of harmony solos lending an edge to proceedings, digital dexterity delivering for Devildriver fans. This is where axe slingers Jeff Kendrick and Mike Spreitzer really let loose, and woe betide the doubters because here is more proof that subtlety and talent lie behind the full-on assault. 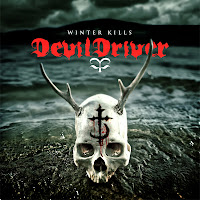 Fafara explains some of the ethos that went behind all of Devildriver's work and this album in particular.

“I come from a construction-worker background,” he said.. “I want bluecollar dudes to listen to my songs and be able to say, ‘Man, that’s exactly how I feel about today, my boss and the idiot I had to yell at.’

"Metal is a very empowering thing, the same way God is an empowering thing. For kids on the outside who don’t want to wear the polo shirt to school, they have their mystic in whatever singer they choose for their favorite band. And words can be that for you. I want to stress that I’ve never wanted to be all about the negative.”

And despite the aural attack on this release, and the at times lyrical rage, this is a positive album. Not only is there a senses of freshness, there is also a positive outlook; at times this is plain uplifting.

The sense of renewed daring is perhaps truly evident on the album closer, a cover of Awolnation's Sail. Devildriver have taken an electro-pop track and turned it into a trance like hymn to disaffection.

“I’ve always been a lyrics guy, and when I heard that song, I totally got it,” Fafara says. “[The metaphor of] sailing is totally about touring. I was on Ritalin for 12 years when I was a kid for my ADD, so I totally understand that line. I just fell in love with that song. I called the band and told them to call it up on the computer. They said, ‘You know what? Let’s attack this.’”

Despite Devildriver appearing to the ignorant as nothing more than Fafara's vehicle there is a cohesive force to the outfit.

With new label Napalm Records behind them this is perhaps Devildriver's own rebirth - stronger, and ready to test themselves; with the result that it is a rewarding listen.  The last word therefore has to go to Fafara:

Winter Kills is out now on Napalm Rercords
Posted by Jonny at 11:40 am

great review sir. i am loving the devildriver album, every song is lethal. good to hear metal so up lifting